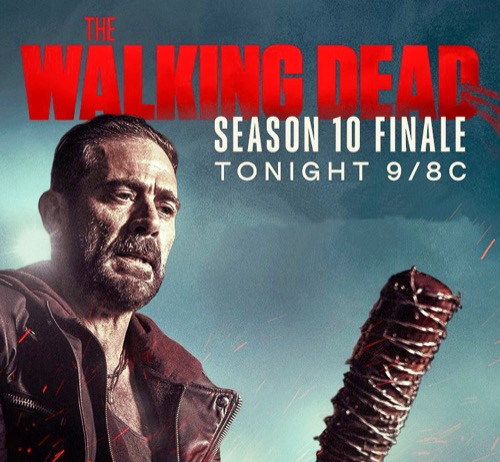 Tonight on AMC our favorite show The Walking Dead airs on an all-new Sunday, April 4, 2020, episode and we have your The Walking Dead recap below. On tonight’s The Walking Dead Season 10, Episode 22  called, “Here’s Negan,” as per the AMC synopsis, “With Maggie back at Alexandria, Carol takes Negan on a journey, hoping to minimize the increasing tension.

There, Negan has too much time to self-reflect and comes to a conclusion about his future.”

On tonight’s season final of TWD, the episode begins with Maggie, who is walking down the street with her son – she looks like she could kill Negan in his sleep. Negan is nearby, he looks at her, but she ignores him. Then Carol is with Negan in the woods, he asks her if she can smooth things over with Maggie.

They stop at the cabin where dog came from, his things are there and she tells him that the council voted, they don’t want him near them. He asks her if the council actually banished him, or if it was just her. She smiles and gives him the rabbit she caught.

Negan is thinking back to the old him and a bloodied Lucille, dressed in his famous leather jacket, he talks to his old self and calls him a clown.

We rewind the clock back to when Negan has his showdown with Rick and he was looking for his bat. He is in the wood digging in the ground. Hi digs hole after hole, maybe a dozen or so, until he finds Lucille.

Twelve years earlier: A young Negan is being held captive by a gang leader named Baxter. He tells them his wife has cancer and he needs the chemotherapy drugs for her. Baxter wants the location of where the drug came from. Baxter hits Negan in the face. Negan gives him the information, he says there is a stockpile, he has been tracking them for weeks and he found it a few days ago.

We then go to when Negan found the drugs, he approaches a motorhome and approaches with a gun, a woman hits him on the head and knocks him out with a baseball bat. Negan is waking up, he is tied up inside the motorhome. The man in the motorhome’s name is Franklin, he tells Negan if he doesn’t give any problems, he will untie him. Negan tells him that his wife has cancer and he is taking care of her since the world went to crap.

He was a high school gym teacher. The doctors gave them a calendar of what his wife needed and when, so he knows how to give it to her. Six weeks earlier, Negan is with his wife, he has bags of medicine in the drugs to give her. He administers the drug and puts the rest in the freezer but he has to turn the generator off for a while because it attracts the walkers.

Negan is reading to his wife, he tells her it sucks and he can’t do it anymore. He hears walkers outside, he goes out, dressed in a hoodie and dark glasses yielding a kitchen knife. This Negan is not the one we know, he stabs the walker in the eye, it keeps attacking – his wife goes outside with a handgun and shoots the walker.

Negan returns home after finding some gas for the generator. The two go to bed, he cuddles with his wife and sings to him. We see him think back to all the treatments he gave her. They sit down for dinner and she gives him a gift, a leather jacket that she kept from before the world went crazy. He tells her that he doesn’t deserve anything from her, the man that he was, the pain that he put her through.

He lays awake at night and thinks about how lucky he Is that she stayed with him. She says she stuck with him because she could always see the man he is right now. The two are in bed, Negan wakes up, the power went off through the night and the refrigerator is full of water – the chemo meds are ruined. We then see Negan packing up, he tells her that he is going out to find meds for her.
Seven months earlier – this is before the walkers.

Lucille finds Negan playing video games. She is mad with him because she found the receipt for the leather jacket, it cost six hundred dollars – she tells him that she is returning, he says he threw the receipt out. At dinner, she tells him that she has an appointment tomorrow and needs him to drive her home. He says he can’t he has to meet with his parole officer. We see her at the appointment, she was told that she had cancer but she is lucky they caught it early. In the car, she tries to reach Negan, but he doesn’t answer his phone.

After calling his parole officer and finding out that he didn’t have an appointment, she drives herself home in a rage. At home, she sits at the dinner table, a gun by her hand. She throws cancer booklets on the table, and when Negan comes in, she tells him that she has cancer.

We fast forward, Lucille knew he was having an affair back then, she tells him that if he really wants to help her then he should just stay with her. She tells him that it is time for him to go on without her. He says they are not giving up, not ever.

Fast forward to the motorhome with Franklin, he told him how he ended up there. He is lucky, they have the meds that he needed an offer to give it to him, asking for nothing in return. The woman who hit him on the head with the bat gives it to him because he only has a gun to protect himself.

Forward to Baxter, Negan is still being held captive and Baxter wants to know where he got the meds. Baxter holds the gun to Negan’s head and threatens to shoot him between the eyes. Negan finally gives up the location and after the men go after Franklin and his daughter, Negan is let go. Negan then returns to Lucille and finds that she has turned. There is a bag over her head, it looks like she killed herself.

Negan is crying, He sits down near her and rips the plastic off her head, and playing in the background is “you are so beautiful.” Negan sits on the floor near the bed with a bottle of booze. He then goes outside, cuts barbed wire from the fence, and wraps it around the bat. He goes back into the house and pours gasoline everywhere and sets the place on fire. Negan gets on his bike and drives away with his new Lucille.

Baxter now has Franklin held hostage and he tells him to tell him where the good stuff is or he is bringing out the girl. Then we see Negan, he returns to save Franklin and makes his first official killing with Lucille, he smashes a guy’s head in with her. After that, Negan shoots another and makes his way inside to save Franklin who has now gotten himself loose from the chair. Negan tells Franklin to go take care of his daughter.

Negan is alone with Baxter and tells him that when he stops talking something terrible is going to happen to him. He tells him that he never killed a man before tonight. One night, he was in a bar with his wife and their favorite song was playing, “you are so beautiful,” by Joe Cocker. A guy was talking, loudly and obnoxiously. His wife asked the man to be a little quiet and when he didn’t, he went over and told the man he owed him fifty cents so he can play the song again for his wife.

He saw red and hit the guy, and his kids went to the school where he worked at. He got fired and sued for the man’s medical bills. Negan tells him that “this” is for not killing him earlier, he bashes Baxter‘s head in. Then we see Negan out in the woods, he is now killing walkers with Lucille.

Negan is sitting in front of a fire, he is talking to his wife in the afterlife and says he hopes she is happy and sorry that he named the bat after her, he misses her and loved the crap out of her. He takes Lucille and puts her in the fire.

Present-day, Negan is walking towards Carol, Daryl, and Maggie. Carol walks towards him and says the whole cabin is not working out for him. She tells him that he stays near them she will kill him and she didn’t want his death on her conscious.