The Young and the Restless: Nick Raises Stakes with Phyllis Wedding Proposal? 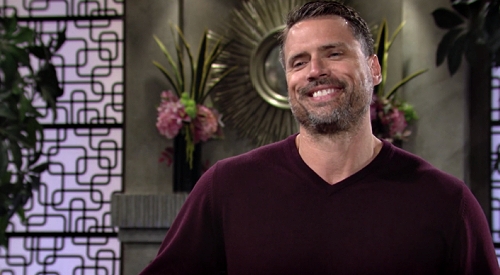 The Young and the Restless (Y&R) spoilers tease that Nick Newman (Joshua Morrow) may propose to Phyllis Summers (Michelle Stafford) as a way to mask his relationship insecurities. Will Nick raise the stakes with a wedding push?

Since other couples are headed to the altar, Nick might decide he should do the same with Phyllis.

Of course, Y&R fans know Nick has been battling some doubts and concerns about his romance. Nick appreciates how comfortable things have become in some ways, but he also feels things are almost too easy.

Even so, it’s hard to imagine Nick dumping Phyllis because there aren’t enough challenges in their relationship.

It seems more likely that Nick will ignore his relationship insecurities at first and try to convince himself he can go all in with Phyllis.

In the September 14 episode, Jack Abbott (Peter Bergman) gives Nick advice about deserving happiness and later has a flashback of Phyllis accepting his own marriage proposal.

Perhaps Jack’s proposal memory could set the stage for Nick to pop the question and leave Phyllis torn.

Phyllis has picked up on Nick’s uneasy vibe, so she might wonder why he’s springing this on her out of nowhere.

There’s also the matter of Jack’s recent love confession and the old feelings he surely stirred up for Phyllis.

Can Phyllis make this level of commitment to Nick when Jack’s pining – just waiting for her to choose him once again? Phyllis might end up holding out hope for Jack’s new marriage proposal instead!

A “Phack” reunion certainly seems to be in the works, but Nick and Phyllis will cling to “Phick” until there’s nothing left to cling to anymore.

The Young and the Restless spoilers say Nick will make some shocking moves this fall, so stay tuned.

CDL will have other terrific Young and the Restless spoilers, updates and news, so stop by frequently.