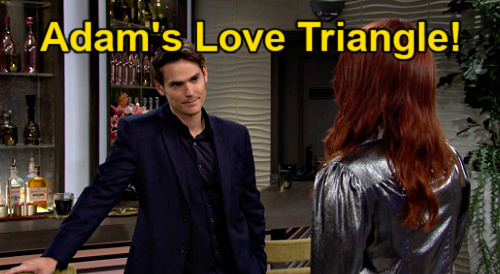 The Young and the Restless spoilers document that Adam Newman (Mark Grossman) doesn’t appear to be in love with Chelsea Lawson (Melissa Claire Egan) or Sally Spectra (Courtney Hope). Neither lady appears to be in love with him at this exact moment in the plot either. However, current developments imply that a triangle could appear on Y&R this fall.

Chelsea isn’t an option at the moment. She’s in Minnesota, with her mother, Anita Lawson (Catherine Bach).

As for Sally, she’s decided to press the reset button. For once Hope’s character is thinking of someone other than herself. Chloe Mitchell’s (Elizabeth Hendrickson) tell about Connor Newman (Judah Mackey) made sense and a difference. So, Sally is backing off Adam for now.

Young and the Restless Spoilers – Chelsea Lawson Back This Fall

It appears as though Chelsea will return to Genoa City, Wisconsin, in the fall. That projection is based on Egan’s current maternity leave, with her son, Caden Robert Katrosar, being born in August.

Egan appears to have filmed advanced scenes, which is allowing her character to remain part of the storyline. Chelsea’s video calls enable her to check in with Adam about life in GC and telegraph her comeback options.

Chloe and Adam want Chelsea to be part of Newman Media’s platform, but she hasn’t committed to it yet. While Chadam isn’t together, the likelihood of that couple’s revival can’t be dismissed based on history.

Young and the Restless Spoilers – It’s Not You, It’s Me, Sally Spectra

Sally initiated a kiss with Adam after her splash-off with Phyllis Summers (Michelle Stafford). He pushed back and then followed with a verbal explanation.

Hope’s character intended to begin pursuing Adam. While he finds her to be attractive, Adam reinforced the sincerity of his redemptive path.

Adam’s admission, that those women who he has been involved with haven’t fared well, was affirming. He used his backstory as an argument against Ally forming.

Young and the Restless Spoilers – Adam Newman Focused Only On Business

Adam has refrained from pursuing the romantic arts during his tenure as the head of Newman Media. That stance is based on his father’s advisement, to a certain degree.

However, Adam’s choice to solely focus on business can not hold forever. How many opportunities for drama would exist in that instance?

Projecting Chelsea’s return and the creation of a triangle that includes Adam and Sally makes sense. But the Connor point that Chloe raised will likely stick unless or until Chadam ends unless, of course, it revives again.