The Young and the Restless Spoilers: Amanda Crumbles After Naya’s Cruel Rejection – Falls Into Devon’s Arms 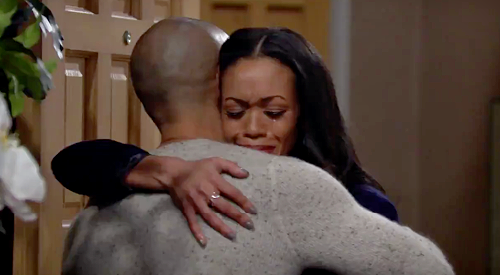 The Young and the Restless spoilers tease that Amanda Sinclair (Mishael Morgan) will finally get some answers during the week of January 11-15. As Y&R viewers know, all Amanda wants is for the holes in her life to be filled in.

Amanda is desperate to know why her bio mom gave her and Hilary Hamilton (Mishael Morgan) up at birth, and why they ended up being separated.

Well, soon Amanda’s going to get the answers she’s been seeking. Early in the week, Amanda will force the issue with Naya Benedict (Ptosha Storey) when she shows up at Naya’s home and pounds on the door wanting answers…NOW.

According to Y&R spoilers, Naya will answer the door but she’ll continue to insist that she only has one daughter – Imani Benedict (Leigh-Ann Rose).

That will hurt Amanda deeply, but she’ll persist, telling Naya that she’s not going away and that she’s going to get answers one way or another. Eventually, a stoic Naya will agree to talk with Amanda and give her the answers she’s looking for.

Naya will then show up at the Grand Phoenix to talk with Amanda privately, telling Amanda that this is beyond difficult.

Well, soon, Naya will lay the whole story on Amanda, and from the direction of next week’s Y&R spoilers, it doesn’t look like the answers are going to be anything like what Amanda expects.

From Amanda’s recent talks with Devon Hamilton (Bryton James), it would seem that Amanda thinks perhaps Naya gave up her babies as a college student because she didn’t want the responsibility.

It has also crossed Amanda’s mind that Naya might have been shamed into giving up the babies and sweeping the pregnancy under the rug to protect her family’s political aspirations.

The thought of being sacrificed for someone else’s ambitions makes Amanda’s blood boil, and she’s just sure that she’s going to hear a story like this – something that she can really blame Naya and her family for.

But Y&R spoilers say that Naya’s story will utterly shock Amanda, and it doesn’t look like it will be what Amanda ever dreamed was coming. Could Naya have been the victim of rape and perhaps gave up her babies for that reason?

Or perhaps the father was someone who was dangerous, and the family wanted to protect Naya and the babies from him.

Naya could even tell Amanda that she’s just a painful reminder of what happened all those years ago. And if Naya was the victim of an assault, she might want nothing to do with Amanda ever again, which would of course be devastating for Amanda to hear.

Whatever the case, what Amanda hears from Naya is going to stun her, and she’ll run straight to Devon’s penthouse, where she’ll fall into his arms sobbing. It’s going to be an emotional time for Amanda, and it doesn’t look like the truth is going to give her the immediate closure she wanted.

The good news here is that Amanda will have the support of Devon to help her through this difficult time, so at least she won’t be left flailing without anyone to comfort and counsel her. Devon and Amanda will probably work through the pain together, and they’ll likely become closer as a result

What do you think is the stunning truth that Amanda is going to hear from Naya? Stay tuned to the CBS soap and don’t forget to check CDL as often as you can for all of our Young and the Restless spoilers, updates, and news.