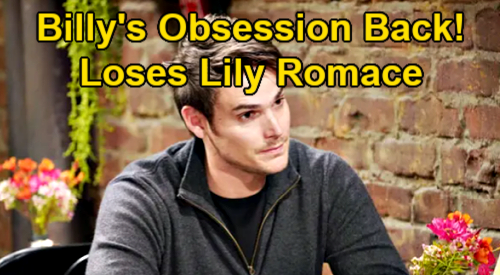 The Young and the Restless spoilers tease that Billy Abbott (Jason Thompson) is in for a rude awakening very soon. As Y&R viewers know, Billy’s fully aware that Victor Newman (Eric Braeden) is actively seeking to re-invigorate Newman Enterprises with a new media division.

Victor is looking to compete with Chancellor Communications, and right now, Billy’s saying, “Bring it on.”

However, Billy doesn’t yet know the full scope of Victor’s big plan. Given that Y&R spoilers say that Victor and Adam Newman (Mark Grossman) will soon be doing business together, it seems that Victor may get Adam heavily involved in running the new Newman Enterprises media division.

In fact, Victor might just put Adam in charge of the division and pit him directly in competition with Billy.

That would be one way to really get under “Billy Boy’s” skin, since Victor knows that there’s a lot of bad blood between Adam and Billy.

Of course, Adam will likely just be Adam as he runs the Newman media division, and that would probably involve a lot of trash talking and egging Billy on. And we all know that Billy would take it all as a challenge and would relish the idea of besting Adam and Victor at their own game.

The only problem is that Billy made Lily Winters (Christel Khalil) a big promise – he agreed to put Adam in his rearview mirror and stop obsessing over his nemesis.

Yet something tells us that once Billy is put into direct competition with Adam, it’s going to be game on once again – something that Lily isn’t going to like or appreciate.

Lily will probably be all for healthy, above-board competition. But Lily probably won’t like it if Billy starts to get obsessed with taking Adam down once again.

Lily has had to reign in Billy when it comes to his Adam obsession before, and she probably thought this was long behind them. Now Billy could become driven to break Adam, and it could cause friction between Billy and Lily.

In fact, the whole thing could really threaten Billy and Lily’s relationship, and since Adam’s smart, he’ll surely find ways to goad Billy into behaving in ways that Lily just doesn’t like – all with the specific purpose of ruining Chancellor Communications as well as Billy’s personal relationship with Lily.

Things could really get ugly between Adam and Billy going forward, and it could be the first major test of Billy and Lily’s new relationship. Do you expect to see Billy and Lily fall apart once Adam gets in Billy’s head again?

Stay tuned to Y&R and we’ll keep you current on all the newest Young and the Restless spoilers, updates, and news.