The Young and the Restless Spoilers: Billy’s Demotion Disaster, Lily Relationship on the Rocks 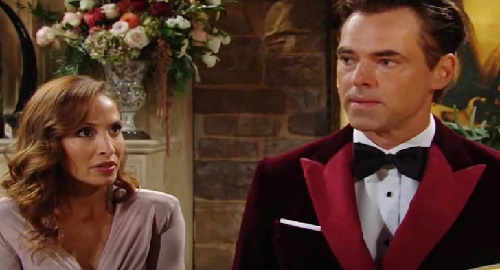 The Young and the Restless (Y&R) spoilers tease that Billy Abbott (Jason Thompson) may face a demotion disaster and find that he can’t handle Lily Winters (Christel Khalil) being the boss. Will this put Billy and Lily’s relationship on the rocks?

Y&R fans know Billy’s priority ever since his latest screwup has been trying to shield Lily from the fallout. That’s why Billy was originally willing to go before Victor Newman (Eric Braeden) and offer to step down in exchange for letting Lily run ChancComm in peace.

Billy’s no longer willing to be the Newman sacrificial lamb as of the December 1 episode, but he’s still willing to step aside and let Lily’s career flourish. However, that means accepting that Jill Abbott (Jess Walton) wants Lily as the head of Chancellor Industries while Billy steps into a supporting role.

Of course, Billy understands that he messed up big time and won’t want to hold Lily back from a position she’ll thrive in. At the same time, it’s going to be hard for Billy to go from being part of the decision-making process to becoming a second in command with no real control.

Billy may decide to swallow his pride and go to work with Lily at Chancellor Industries since ChancComm is on the verge of being sold. It could be Billy’s way of trying to salvage what’s left of their working relationship, but it could end up taking a major toll on their personal one.

That’s because working with Lily will actually mean working FOR her. There’s going to come a time when a significant choice comes up at Chancellor Industries – presumably one where the risk is high and the reward could potentially be great.

Those are always the situations where Billy would want to go for it and Lily would want to play it safe. What’s going to happen when Billy pushes to take the gamble and Lily shuts down the idea completely?

Let’s face it: Billy won almost every argument at ChancComm. He would listen to Lily’s concerns, but he’d usually pressure her into doing what he wanted. Billy won’t be able to do that anymore, so it’s bound to drive him crazy and put a strain on his romance.

The first time Lily pulls rank and declares that what she says goes, there’s going to be trouble. There’ll be even more trouble as other similar situations arise and Lily continues to run Chancellor Industries her way, not Billy’s.

Naturally, Lily has to officially accept Jill’s offer first, but all signs point to her doing just that. If Billy’s willing to step into the COO spot, how long will he realistically last in it? Could the work drama that’s brewing lead to Billy and Lily’s crumbling relationship at home?