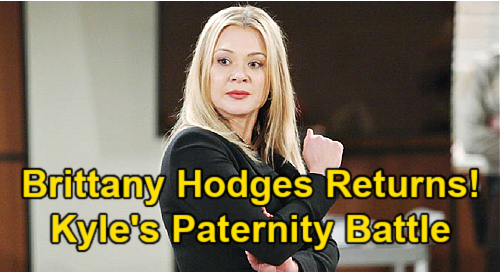 The Young and the Restless (Y&R) spoilers reveal that a familiar face is returning to the CBS soap. Lauren Woodland will reprise her role as Brittany Hodges with some upcoming appearances in Genoa City, so let’s talk about what’s in store.

Y&R fans know that when Brittany’s name comes up, it’s usually because someone’s dealing with some legal drama. That’ll be the case this time around as well. The Young and the Restless spoilers confirm that Brittany will be summoned to help with a legal case, but who will hire her and why?

The most likely option here seems to involve Kyle Abbott’s (Michael Mealor) latest dilemma. Kyle potentially has a son with Tara Locke (Elizabeth Leiner), but he can’t know for sure unless he does a DNA test. Of course, Kyle can’t do a DNA test if Tara blocks him – and that’s exactly what she’ll try to do.

Brittany might have quite a fight on her hand since Ashland Locke is a powerful man with plenty of money for a top-notch legal team. Kyle covered his tracks well, so there isn’t even proof that an affair happened. It’s Kyle’s word against Tara’s when it comes to their hidden romance.

Even so, Brittany might help Kyle with his case and ultimately secure the DNA test that he needs. This story can’t move forward until Kyle figures out Harrison Locke’s paternity with certainty. If this is the legal case Brittany is called in on, she should be poised for a win.

Sooner or later, The Young and the Restless spoilers say Kyle will discover the truth about Harrison, so we’ll see what the inevitable paternity test results reveal. As other news and updates emerge, we’ll keep you posted.

Y&R fans will see some hot drama as this storyline moves along, so stay tuned. CDL’s the place to be for sizzling Young and the Restless spoilers, updates and news, so don’t forget to stop by frequently.