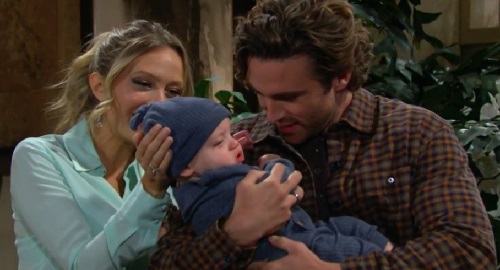 The Young and the Restless (Y&R) spoilers tease that Chance Chancellor (Conner Floyd) will face a rough transition to civilian life. There’ll be some daddy and husband challenges following Chance’s return home, so let’s talk about what’s in store.

The bad news is Chance has been through an extremely traumatic ordeal that’ll stick with him forever. Chance can’t forget what he’s been through or just shove aside the guilt he feels over what happened to his friends and colleagues.

Although Chance will let other agents handle the remainder of the mission, he’ll continue to struggle over the part he carried out. As a result, Chance may battle some nightmares and grow distant from Abby in some ways.

The show has talked about how Dominic “absorbs negative energy” in the house, so that’s something Chance will have to be mindful of once he’s living under the same roof with his son. Even just the adjustment from agent to dad could be tough.

Chance is used to high-risk situations that no doubt bring excitement on some level. Things could honestly be a bit boring for Chance once he settles into diaper duty and all the other mundane parts of parenting, so that’s another challenge to consider.

Since Devon Hamilton (Bryton James) is Dominic’s bio dad and has already bonded with the baby, Chance may struggle to step out of Devon’s shadow and carve out his own role as a father. He’ll have to deal with Devon’s resentment over him leaving Abby in the first place, so there’s that, too.

There’s also the matter of finding a job that’ll suit Chance in the coming weeks. Abby may protest if Chance wants to go back on the force or even resume private security work. She might be extra wary after almost losing Chance for good, which is understandable under the circumstances.

Still, Chance will have to figure out a career path that works for him and that could get tricky. Again, Chance is the kind of guy who craves danger and excitement, so a desk job could be hard to get used to if that’s the road he heads down.

Bottom line, there’ll be plenty of challenges as Chance returns to Genoa City and kicks off the next phase of his life – starting with a welcome home party that’ll make him the uncomfortable center of attention. As other Y&R details emerge, we’ll provide more updates.