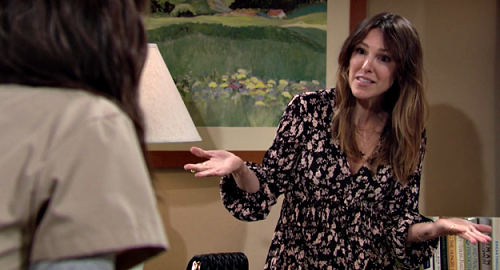 The Young and the Restless (Y&R) spoilers tease that Chelsea Lawson (Melissa Claire Egan) may accuse Chloe Mitchell (Elizabeth Hendrickson) of being a traitor and siding with the enemy. Will Chelsea threaten to expose her partner in crime if Chloe accepts Adam Newman’s (Mark Grossman) offer?

Y&R fans know Adam recently extended an olive branch, though Chloe suggested it seemed more like a bribe. However, Adam was adamant that the offer was legitimate.

Adam gave Chloe the chance to run an online fashion outlet that’s part of Newman Media – leaving the door open for Chelsea to run it alongside Chloe once she was well enough.

Although Chloe rejected the offer initially, she may change her mind soon and admit it’s a pretty sweet deal. The Young and the Restless spoilers say Chloe will have another meeting with Adam and will have some sketches with her.

Chloe may want to learn more and decide this might be worth pursuing after all.

Adam thought it could be something for Chelsea to look forward to – like a positive goal for Chelsea to work toward upon her release. Of course, Adam’s the one who’s delusional if he thinks that’s how Chelsea will actually react.

Chelsea hates Adam’s guts and goes into hysterics at the mere mention of his name. In what universe will Chelsea be grateful to Adam and get excited about anything connected to Adam or his father?

If Chloe goes to Chelsea and tries to sell her on the pitch, Chelsea may rip into her bestie. She already felt like Chloe was siding with Adam when Chloe understood why the restraining order was lifted.

Chelsea isn’t thinking clearly and is extra sensitive to Adam-related drama at the moment.

Chloe knows Chelsea has more mental health struggles than she realizes. Hearing about this online fashion outlet offer could really set Chelsea off.

It could lead Chelsea to toss threats around and make it clear that she’ll throw Chloe under the bus if she doesn’t stand against Adam completely.

Kevin Fisher (Greg Rikaart) has been worried about the possibility that Chelsea will come unspooled and reveal Chloe’s part in the poisoning plot.

Chelsea just might do it if her mental health worsens and she feels like Chloe’s betraying her for the sake of Adam’s deal. CDL will have lots of other fantastic soap spoilers, news and updates to read up on, so stop by frequently.