The Young and the Restless Spoilers: Chloe & Rey Team Up On Chelsea’s Behalf – Scheme To Ruin Adam’s Life? 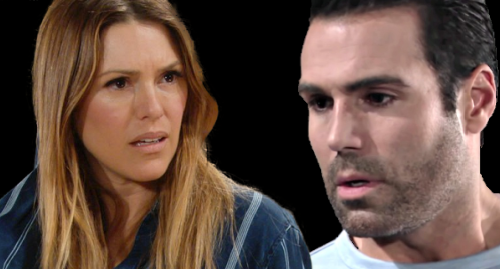 The Young and the Restless spoilers tease that Rey Rosales (Jordi Vilasuso) may get a unique opportunity soon. As Y&R viewers know, Rey is furious with Sharon Rosales (Sharon Case) and Adam Newman (Mark Grossman) over the hand-holding incident when he found Sharon and Adam together at the ranch house. And during the week of February 22-26, things are going to seriously escalate.

Specifically, Rey will learn about Sharon and Adam’s kiss at Society when a picture of the smooch makes the rounds in Genoa City. Rey’s going to be livid with Sharon, and he’ll march right over to Adam’s penthouse and angrily start throwing threats around.

Speaking of Chelsea, she’s going to be outraged when she sees the picture of Sharon and Adam kissing, too.

Unfortunately for Chelsea, she won’t be able to fully express her fury due to her stroke, but Y&R spoilers say that she’ll manage to communicate with her bestie Chloe Mitchell (Elizabeth Hendrickson) about what Adam’s putting her through, and Chloe will realize that Chelsea wants to take action.

Well, it might not be long before Chloe approaches Rey with an incredible offer. Chloe, working on behalf of Chelsea, could go to Rey for help. We all know that Chloe does not care for Adam, and she’d prefer that Chelsea wasn’t anywhere near the man.

What if Chloe went to Rey and they worked together to make sure that Adam suffered tremendously?

Rey would probably initially balk at the idea of teaming up outside the law with Chloe, but he might just end up considering the offer, especially since Adam has taken things to a whole new level by kissing Sharon.

Rey’s been waiting to bring Adam down for a long time now, and his days of sitting back and taking a “live and let live” approach are probably long gone.

We’ll see what happens here, but it might not be long before Rey and Chelsea are in cahoots, with Chloe being the go-between. After all, Chloe would be the one with unfettered access to Chelsea.

Do you think that Rey would work with Chloe to find a way to make Adam pay? Stay tuned to the CBS soap and keep coming back to CDL for the latest Young and the Restless spoilers, news, and updates.