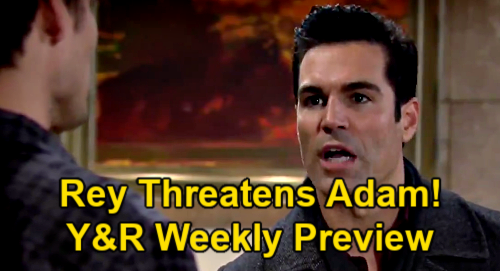 The Young and the Restless (Y&R) spoilers preview for the week of February 22 teases the drama surrounding Sharon Rosales (Sharon Case) and Adam Newman (Mark Grossman) will keep on coming. The new Y&R preview for the week of February 22-26 is out, and it’s all about the Genoa City scandal that’s going to explode and cause major problems in Sharon and Rey Rosales’ (Jordi Vilasuso) marriage.

As Y&R viewers will remember, Sharon and Adam shared a kiss at Society, but they decided that it was a mistake and that they’d keep it a secret. The only problem is that someone spotted the pair mid-smooch, and that unknown person snapped a photo of the kiss.

On the episode to air on Monday, February 22, someone will send that photo to Faith Newman (Alyvia Alyn Lind).

Well, according to Y&R spoilers, Faith will explode in anger and disgust over her mom’s kiss with Adam, and it looks like it won’t be long before the photo of Adam and Sharon’s kiss circulates around Genoa City.

One way or another, Rey is going to see the photo, and it’s only going to back up everything he’s been saying about how Sharon just keeps getting drawn back into Adam’s orbit.

The new Y&R preview shows Rey confronting Sharon about the kiss photo, and it looks like Sharon will explain that it wasn’t her doing, and that Adam pulled her into a kiss.

While this is technically correct, but Sharon then kissed Adam back in a major way. “Why did he think it was ok to do that?” Rey demands.

“It was a mistake,” Sharon lamely argues, as if that’s going to pacify Rey at this point. Let’s face it, Rey was already on the brink of walking out on Sharon, and now that he’s going to be totally humiliated around town with the kiss picture, he may not be long for the marriage.

Still, it seems that Rey’s not going to back off of going after Adam. The Y&R preview shows Rey over at Adam’s penthouse ranting about what Adam has done. “I thought you were out of her life, but you keep coming back, and you’re not going to stop until somebody makes you,” Rey fumes.

“Is that a threat, detective?” Adam fires back. “There are ALWAYS consequences,” Rey bellows, indicating that he’s going to go after Adam and possibly try to make his life miserable.

Of course, if Chelsea Lawson (Melissa Claire Egan) is listening to this exchange, which Y&R spoilers indicate that she will be, then Adam may have more to worry about from Chelsea when she recovers than from Rey.

We’ll see what Rey ends up doing to Adam. Rey’s bark tends to be worse than his bite, so he may just chicken out and do nothing in the end. But wouldn’t it be great to see Rey really go after Adam, or even team up with Chelsea to make Adam pay big time?

It looks like we’re in for an exciting week, so stay tuned! We’ll give you further updates as more Y&R news comes in. Stick with the CBS soap and CDL will keep you up to speed on all the latest Young and the Restless spoilers, updates, and news. We’ve got you covered!

Actions always have consequences. 👊 #YR is new this week on @CBS and CBS All Access! pic.twitter.com/bivfQtXQRA