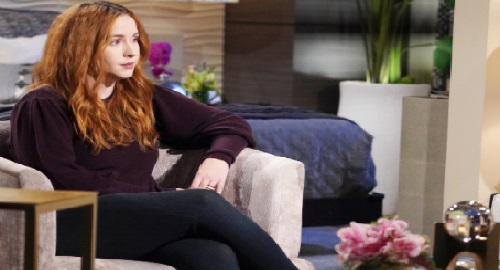 The Young and the Restless (Y&R) spoilers recap for Friday, October 1, reveals that Ashland Locke (Richard Burgi) will decide to move out temporarily – and unbalanced Mariah Copeland (Camryn Grimes) will get some tough love. Jack Abbott (Peter Bergman) will also share some flight delay news, so here’s what Y&R fans can expect.

At Society, Nate Hastings (Sean Dominic) will bump into Ashland, who’ll admit he could use a friend right now. Ashland will talk about making choices people may not understand and will add that he grabbed a defining moment. He tried to forget his history, but he’ll seem to realize that’s not really possible.

Nate will feel like most people have some ghosts they’re running from and will offer a pep talk. Ashland will admit his head is telling him to wait it out when it comes to Victoria Newman (Amelia Heinle), but his heart will be telling him something else. Nate will suggest that maybe Ashland should follow his heart.

At Newman Enterprises, Victoria will tell Nikki Newman (Melody Thomas Scott) that she finally knows who Ashland really is. She’ll explain that Ashland took the name of a friend who died in a terrible car accident. Victoria will talk about how heartbreaking it was watching Ashland relive that story. She’ll just be disappointed that Ashland only came clean because he backed into a corner again.

Victoria will rant about Nick being the person who put Ashland in that corner. She’ll admit she uninvited Nick to the wedding, but Nikki will push Victoria to reconsider. Nikki will wonder if there’s even going to be a wedding now, but Victoria will insist she still loves Ashland. Once Victoria decides what she’s going to do, she’ll contend that Ashland will be the first to know.

At the Abbott mansion, Nick will arrive and bring Phyllis Summers (Michelle Stafford) up to speed on the Bobby DeFranco story while Jack is out of the room. Nick will confess that Victoria considered his actions a betrayal and uninvited him to the wedding, so Phyllis will urge him to make things right before it’s too late.

However, Nick will want to concentrate on Summer Newman (Hunter King) and Kyle Abbott’s (Michael Mealor) wedding first. He won’t want to cast any shadows on their little girl’s big day, so he’ll intend to shake his mood and focus on what’s important.

When Jack returns, he’ll offer updates on their flight being delayed due to storm in their path. Jack will let Phyllis and Jack know that they’ll be flying out first thing in the morning, so they’ll leave their luggage and plan to be back bright and early.

Traci Abbott (Beth Maitland) will catch Jack looking wistful as Phyllis leaves, so she’ll push him to open up. Jack will admit he’s been thinking a lot lately about his history with Phyllis, but he’ll assure Traci he’d never act on his feelings. He won’t want Traci to worry and will talk about hearing Dina Mergeron’s (Marla Adams) voice in a dream recently.

Traci will suggest she sees and hears Colleen Carlton (Tammin Sursok) all the time. She’ll think it’s normal, so Jack will agree that love never really leaves you. It just takes on different forms, so everyone who ever touches your heart stays there.

Back in their hotel suite, Nick and Phyllis will discuss how happy Summer seems as they get off the phone with her. They’ll ultimately discuss Nick’s fractured relationship with Victoria before Phyllis asks if he’s sorry he pursued things in Jersey. Phyllis will feel like it’s her fault for giving Nick a nudge, but he’ll insist this was completely his decision.

Nick will feel like he did what he thought was right, so Phyllis will choose to be optimistic. She’ll hope that maybe Nick helped Victoria bond with Ashland even further – or at least helped Victoria walk into this marriage with her eyes wide open. Nick just won’t think Victoria’s going to see it that way anytime soon.

Back in Victoria’s office, Ashland will show up and find Nikki alone. Nikki will acknowledge that Victoria filled her in and won’t be sure what to make of Ashland now. She’ll just be upset for Victoria’s sake and will think Ashland needs to give her daughter some space.

Ashland will decide to stay in a room at The Grand Phoenix until Victoria decides when or if he can come home. After Ashland checks in and starts to board the elevator, Victoria will enter the lobby and stop him.

In Mariah and Tessa Porter’s (Cait Fairbanks) suite, they’ll argue since Tessa shared Mariah’s desire to have a baby with Sharon Rosales (Sharon Case). Tessa will protest that she was confused and concerned, so she needed someone to talk to and didn’t think Mariah was really hearing her.

Mariah will finally settle down and try to listen to what Tessa has to say. Tessa will suggest Mariah’s baby plan is coming from a place of desperation, but Mariah will contend this is about all the love she has to give.

Tessa will reiterate that she’s not ready, but Mariah will wonder how Tessa knows that and will ask who’s ever really ready to have a child. Mariah will then see Tessa’s point about not really listening, but she’ll still be struggling to let this go. Tessa will suggest she needs to be in the right mindset to have a baby and will want Mariah to find her balance again.

“You think I’m unbalanced?” Mariah will ask. Tessa will clarify that it’s wrong to bring a child into the world to fill the hole in Mariah’s heart. She’ll also think it’s unfair to push her to do something she’s not ready for. Tessa will get choked up as she worries she could lose her balance too and then they’d both be a mess.

Mariah will wonder if that’s the end of the discussion, but Tessa will assure Mariah she wants to keep the lines of communication open. She’ll think having honest conversations is a step in the right direction, even if it’s hard. Tessa will feel like maybe they should table the baby talk until after they get back from Tuscany, so Mariah will agree to that.

Mariah and Tessa will remind each other of their love before Mariah admits she needs Tessa more than ever. Mariah won’t want to push Tessa away, so Tessa will insist she’s not going anywhere without her. After they share a warm hug, Mariah will decide to turn in early. She’ll end up feigning sleep when Tessa tries to chat about fun activities to do later.