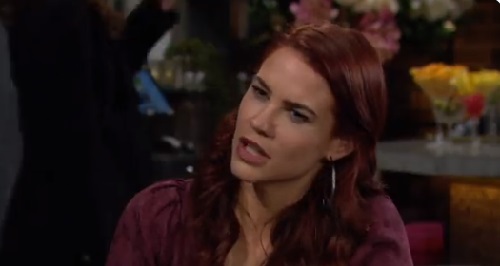 First on Monday’s Y&R episode, Billy will make it clear to Sally that he doesn’t want her company. Sally will insist she’s waiting for takeout anyway, so she’ll join Billy and try to make him look a little less pathetic.

After Billy alludes to Sally dating Adam Newman (Mark Grossman), she’ll clarify that he’s her boss and that nothing romantic is going on. Billy will think that’s good since no one is more capable of tearing apart your soul than Adam.

Sally will feel like something deeper is going on here and will ask if Billy’s really going to be OK. She’ll buy Billy a cup of coffee and will admit she knows all about being a pariah. Billy will admit he managed to lose the trust of his most stalwart believer: his mother. When Sally asks how, Billy will presume her platonic boss would love to hear all about it.

Sally will argue that she doesn’t need details and that she understands doing the wrong things for the right reasons. She’ll think Billy has a good heart, but he’ll turn down Sally’s offer to stick around when her takeout comes. As Sally exits, Billy will watch her go.

“That’s it, Sally. You run back to Adam and tell him all about my pathetic state please,” Billy will mutter. Meanwhile, Adam will show up at The Grand Phoenix, where Phyllis Summers (Michelle Stafford) has agreed to help Nikki Newman (Melody Thomas Scott) with Chance Chancellor’s (Conner Floyd) welcome home party.

Adam will hear about Chance’s survival and the party to celebrate, but he’ll opt to call Abby instead since he already has plans with Connor Newman (Judah Mackey). When Noah Newman (Rory Gibson) appears, he’ll mention hearing the good news about Chance from Mariah Copeland (Camryn Grimes).

After Adam takes Noah back to Newman Media for a business pitch, Noah will insist the branding work he did was a one-time deal. He won’t want to take on any more Newman Media projects, but Adam will get him to at least think about it.

Although Noah will find it tough to buy the new-and-improved Adam, he’ll confess he does notice a change. Adam will think maybe the lesson is don’t write people off since everyone can surprise you.

When Sally interrupts, she’ll compliment Noah’s work and wonder if they could get him to do some stuff for the fashion platform as well. Adam will note that Sally will have to get in line since he has another project first – that is if they can even get Noah on board.

Sally will feel like she could convince Noah if given the chance, so he’ll appreciate the hard sell and take off. Adam will mention that Sally came on a little strong, so she’ll wonder if he suddenly has a problem with her approach. However, Adam will ultimately brush past it and wonder what Sally wanted to talk about.

Although Sally will know Adam wanted to hit Billy where it hurts, she’ll wonder if his plan was to do serious psychological damage. Adam will scoff over the idea of Billy being a victim, but he’ll admit he wasn’t trying to give the guy a nervous breakdown.

Sally will offer updates on her accidental encounter with Billy, who seemed depressed and was drinking. Despite Sally’s concern for Billy, Adam won’t think there’s any need for her to have much sympathy. He’ll pick up a video call from Chelsea Lawson (Melissa Claire Egan) and ask if he can call her back since he’s in a meeting with Sally, but that won’t go over well.

“Sure,” Chelsea will say with an angry chuckle. “Sure, you let me know when it’s convenient for you to hear about my plans and discuss our son.” After Chelsea hangs up abruptly, Sally will urge him to call his ex back and agree to finish her own conversation with Adam later.

At home, Chance will seem uneasy over the welcome home party that Victor Newman (Eric Braeden) wants to throw. Abby Newman-Abbott-Chancellor (Melissa Ordway) will offer to cancel, but Chance will decide he’s missed everyone and will want to feel the love. Chance will add that he’d like to feel Abby again first, so they’ll dash upstairs to make love.

Later, Chance and Abby will be dressed for the party as they spend time with Dominic Newman-Abbott-Chancellor. Abby will seem pleased over how Chance is doing on daddy duty and will admit Devon Hamilton (Bryton James) was previously the only one who could calm the baby down without feeding him.

Abby will make sure Chance is still OK with attending this soiree, so he’ll insist he can do anything with her by his side. At Crimson Lights, Victor will stun Victoria with the news of Chance’s homecoming and will get confirmation that Victoria’s interest in ChancComm is purely about business, not protecting Billy.

At the Grand Phoenix again, Phyllis will warn Nikki about Noah’s potential influence on Adam. She’ll also wonder why Noah came home when his career was thriving in London, but Nikki will think some things are more important.

Phyllis will assume Nikki’s taking a jab at her over her breakup with Nick, but Nikki will insist not every comment in a conversation is about Phyllis! When Nikki points out Phyllis seems to be doing just fine after the split, Phyllis will once again be offended. Nikki will end up apologizing since people deal with heartbreak in different ways.

When Victor arrives, Phyllis will make herself scarce while he catches up with Nikki. Victor will want to make sure tonight is all about celebrating Chance and Abby now that they’re both home.

In Victoria’s office, Nick will show up at Ashland’s request. He won’t be interested in Ashland’s attempt to clear the air and won’t be willing to give Ashland a pass like the rest of the family. Nick will assume it’s because Ashland is sick, but he’ll admit that if he found out Ashland wasn’t sick tomorrow, he’d have to wonder if he was ever sick in the first place.

As far as Nick’s concerned, Ashland will be an opportunist with no moral standards. He’ll warn that if Ashland hurts Victoria or takes advantage of her in any way, then he’ll have an enemy for life.

Suddenly, Victoria will walk in and demand to know why Nick is threatening her husband! She’ll be frustrated over Nick’s refusal to accept that people can change and will think her brother is the problem here.

Victoria will assume Nick hasn’t heard that Chance came back alive, so she’ll fill him in on that and the party happening later. Nick will seem upset over being an outsider again and won’t have much of a reaction when Victoria suggests he’s the one alienating everyone around him.

After Nick coldly says he’ll see Victoria at the party, he’ll take off and leave Victoria alone with Ashland. It’ll surprise even Ashland that he’s about to say this, but he’ll wonder if maybe Victoria was being a little hard on Nick.

Victoria will think it’s sweet that Ashland is trying to place peacemaker and will make it clear there’ll be no talk of death during this new treatment. She’ll want to stay positive and will get confirmation that he’s up for the party. Back at the hotel later, Chance and Abby will enter to find a group of delighted guests.

When Billy comes home, he’ll find Lily Winters (Christel Khalil) feeling overwhelmed over the mountain of preparations for the CEO transition. Lily will worry that accepting the job was a mistake, but Billy won’t want her to doubt herself. He’ll offer a pep talk and drop a hint about laying a little groundwork for the idea he’s been brainstorming.