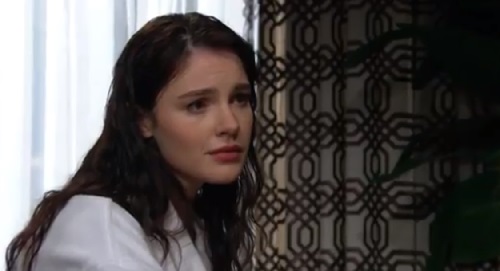 The Young and the Restless (Y&R) spoilers recap for Monday, September 27, teases that Victor Newman (Eric Braeden) will get rid of Jesse Gaines (Jamison Jones) while Tessa Porter (Cait Fairbanks) pumps the baby brakes. Rey Rosales (Jordi Vilasuso) will also have a Miami date surprise in store for Sharon Rosales (Sharon Case), so here’s what Y&R fans can look forward to.

At The Grand Phoenix, Billy Abbott (Jason Thompson) will find out from the woman at the front desk that Gaines checked out. When Billy spots Victor nearby, he’ll have a hunch that Victoria Newman’s (Amelia Heinle) father had something to do with Gaines’ early departure.

In Victoria’s office, she’ll catch Ashland Locke (Richard Burgi) leaving a voicemail and will pick up on his tense tone. Victoria won’t buy Ashland’s excuse about someone not adjusting well to the merger, so she’ll suggest they start the conversation over and focus on honesty.

However, Nikki Newman (Melody Thomas Scott) will interrupt and give Ashland a chance to ditch the discussion. When pressed, Victoria will confess that Ashland still seems to be hiding things. She’ll worry this has something to do with Billy and his continued harassment campaign, but Nikki will hint that other people could be digging into Ashland’s past, too.

Back with Billy, he’ll run into Ashland in The Grand Phoenix lobby. Billy will assume Ashland is there to see Gaines and will reveal that the former lawyer checked out. Suddenly, Victor will walk over and thank Ashland for meeting with him. He’ll want to hustle Ashland into the restaurant, but Billy will hope they got a table for three since he has some questions.

Victor will suggest going back to the ranch with Ashland instead and will complain about Billy being a pest. He’ll tell Billy to take a long walk off a short cliff, but “Billy Boy” won’t be deterred. It won’t be long until Billy finds Victoria with Nikki at Crimson Lights. Billy will mention Gaines and argue that he’s a man Victoria should know about.

Victoria will insist she doesn’t care and won’t know how much clearer she can be about what she wants. She’ll push Billy to leave her alone, leave Ashland alone and “stay the hell out” of their lives.

Once Ashland arrives at the ranch with Victor, he’ll get some shocking news. Victor will reveal that he knows Ashland paid Gaines $300,000 for decades, but he took care of the problem. All Victor had to do was give Gaines a choice: go to prison for blackmail or accept his very generous monetary offer.

Ashland will be taken aback when Victor admits he didn’t care about Ashland’s history with Gaines. Victor will argue that they have similar rough backgrounds and have both done things they regret. He’ll add that he’s a big believer in letting bygones be bygones, but he’ll assure Ashland that he did this for Victoria – not Ashland.

Victor will warn Ashland that he can undo what he did in the blink of an eye. After Ashland insists he just wants to make Victoria happy, Victor will contend that there’s no reason to worry as long as it stays that way. “Cheers,” Victor will say as he lifts his glass.

In her hotel suite, Mariah Copeland (Camryn Grimes) will wonder how one of Dominic Newman-Abbott-Chancellor’s bibs got in her bag. She’ll flash back to some baby memories before Devon Hamilton (Bryton James) arrives.

Mariah will drop a hint about having a plan to move forward with Tessa, so Devon will be glad to hear that she’s hopeful. Mariah will note that the next time Devon sees Abby Newman-Abbott-Chancellor (Melissa Ordway), he can tell her that Mariah’s well on the road to recovery.

At Crimson Lights, Tessa will seek Sharon’s advice. She’ll admit Mariah’s trying to get over losing Dominic by pushing for a baby of their own. Tessa won’t be sure she’s ready for that and won’t think Mariah is either. She won’t think this baby desire is coming from a healthy place, but she won’t want to yank away the fantasy that’s getting Mariah through this right now.

Sharon will suggest it’ll just be worse if Tessa lets it go on and then yanks away that vision for the future, too. She’ll push Tessa to trust her instincts and tell Mariah the truth, but Tessa will know it won’t be easy.

Afterward, Sharon will tell Rey to save her from herself! She’ll admit she’s tempted to mother Mariah to death at The Grand Phoenix whether that’s what her daughter wants or not.

Rey will think Tessa will come to Sharon if there’s a real emergency and will have a distraction in store for his wife at Society. That distraction will involve the perfect date, which will be filled with reminders of Sharon and Rey’s Miami honeymoon.

At the Chancellor mansion, Devon will stop by while Dominic is down for his nap. Abby will admit Dominic is a bit of a night owl and has been keeping her up, but she’ll smile over him being so worth it.

After Devon reveals that he asked Amanda Sinclair (Mishael Morgan) to move in, Abby will want to hear all the details. She’ll have to put the conversation on hold since Dominic will start crying. Since Abby won’t be able to settle Dominic down, Devon will suggest he could take the baby for a walk while Abby gets some rest.

Abby won’t want to impose, but Devon will offer reassurance and calm Dominic right down in his arms. He’ll take Dominic to the park and share a sweet moment by the stroller as he talks about all Dominic’s roots there in town.

Back in their suite, Mariah and Tessa will discuss their trip to Italy for Victoria’s wedding. Tessa will think this is the break they both need, but Mariah will see it more like one last chance to have some fun before they settle down and prepare for their baby.

Mariah will seem disappointed, but she’ll assure Tessa that she gets it. She’ll admit she just got excited over the idea of raising a child of their own.