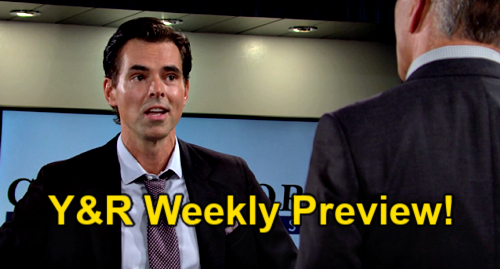 The Young and the Restless spoilers reveal the preview for the week of September 13 shows a heated confrontation. Billy Abbott (Jason Thompson) has come across a suspicious discovery. When Ashland Locke (Richard Burgi) finds out, he threatens Billy. Ashland’s damage control includes confessing, but it might be a watered-down version of the truth.

Y&R spoilers reveal that Ashland is still a bit of a mystery, especially in his younger years. Billy is determined to find out what Ashland is hiding.

After realizing that Ashland has no birth record, and his parents have no birth or death records, Billy thinks he’s closing in on the truth.

Billy tells Victoria Newman (Amelia Heinle) what he has learned but she isn’t interested in hearing more outrageous theories. In her mind, Billy only sees what he wants to see… that Ashland is evil.

The same can be said for Victoria, though. The bride-to-be is also seeing only what she wants to. In her eyes, Ashland is her kindred spirit, her soul mate, her Prince Charming.

Victoria rants to Ashland about Billy’s refusal to stop investigating and his latest discovery. When Ashland hears what it is, he takes drastic action. In the preview, Ashland warns Billy to stop digging and everyone has secrets.

When Billy refuses, Ashland issues a threat by saying, “you definitely do not want me for an enemy.”

This must be linked to Lily Winters (Christel Khalil) trying to reason with Billy. Just how far will Ashland go to keep the truth buried?

The Young and the Restless spoilers reveal that Ashland is forced to do damage control. Victoria doesn’t think anything is suspicious about Billy’s update.

However, once Ashland knows that Billy has found out he has no birth records, he takes drastic action. That indicates that Billy is close to the truth.

Ashland’s damage control is by confessing to Victoria and Victor Newman (Eric Braeden). Ashland’s perspective might be that if he confesses, then there is no reason for the Newmans to continue investigating.

As for Billy, any further “discoveries” will make him look like a jealous ex who is desperate to stop Victoria from moving on.

At least, that is what Ashland believes will happen once he confesses. In his mind, the “confession” kills two birds with one stone.

The Young and the Restless Spoilers: Danger Ahead?

Victoria hears the confession and is shocked. It makes her realize how little she knows about the man she’s marrying.

Ashland threatens Billy, then turns around and confesses to Victoria and Victor. This suggests that the Newmans are only getting half the truth or a watered-down version of Ashland’s secret.

Just what is he hiding and could it be more than just a stolen identity or name change? What Victoria doesn’t know could hurt her in more ways than one.

To dig or not to dig? That’s the question for Billy! Think he’s right about Ashland? 😱 Don’t miss all-new episodes of #YR on @CBS this week. 😍 Watch the latest episodes on @paramountplus. pic.twitter.com/CLx1LNSpaN