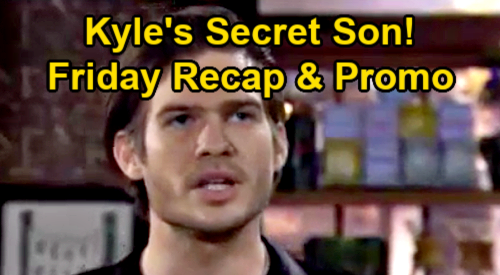 The Young and the Restless spoilers recap for Friday, February 5, tease that Kyle Abbott (Michael Mealor) and Jack Abbott (Peter Bergman) will catch up at Jabot. Through their discussion, Kyle will learn that Jack rode out the ice storm with Sally Spectra (Courtney Hope) at the Abbott mansion.

Kyle will be irked, but Jack will insist that Sally deserves a chance.

At Crimson Lights, Sally will be working when Theo Vanderway (Tyler Johnson) calls from Chicago to say that he’d like to make things up to Sally and that he’s got something on Kyle. Theo will promise to be in Genoa City soon to share his sordid information.

Soon, Lauren Baldwin (Tracey E. Bregman) will arrive to tell Sally that she’s promoting her to Junior Director of Internet Marketing at Fenmore’s.

Summer Newman (Hunter King) will walk in and hear the news, and she’ll gush that the Spencers will soon be coming to Genoa City for a big meeting. Sally will be unnerved.

Lauren will then head to the patio where Gloria Abbott (Judith Chapman) will be trying to get Michael Baldwin (Christian LeBlanc) to make sure she gets the job of Lauren’s assistant.

Michael will balk, giving Gloria numerous examples of how she’s a magnet for trouble. Soon Lauren will approach, and Gloria will act like she’s already got the assistant job.

Sally will head to Jabot, where she’ll tell Jack about her promotion. Sally will credit Jack for helping her with her recent shipping problem, and Jack will insist on taking Sally out for a celebratory lunch.

Meanwhile, at the Grand Phoenix, Summer will gripe to Kyle about Sally’s promotion over drinks. Kyle will think that Summer should leave Sally be and just keep her in line with the dirt she got in Los Angeles.

Summer will wonder why Kyle seems to be on Sally’s side, and she’ll especially freak out when she learns that Sally spent the night of the ice storm with Jack.

Sally and Jack will be at lunch at Society when Sally asks why Jack is single. Jack will explain good-naturedly that he’s just in a down time.

Theo will text Sally saying that he’s at Crimson Lights, and that she needs to get there asap. Sally will make an excuse with Jack and head over to the coffee shop.

Once Sally meets up with Theo, Theo will say that he recently learned something about Kyle. Theo will explain that he and Kyle spent time in the Hamptons and Kyle had a secret affair with an older married woman – the wife of ruthless business mogul Ashland Locke.

Theo will say that this happened four years ago, and that the woman now has a three-year-old son named Harrison Locke.

Across town, Sharon Rosales (Sharon Case) will be trying to get Chelsea Lawson (Melissa Claire Egan) to respond during a therapy session at the penthouse, when Adam Newman (Mark Grossman) pulls her away and says that Sharon is being too nice. Sharon will try a more confrontational approach with Chelsea.

The confrontational approach won’t appear to work, and Adam will walk Sharon out. Chelsea will imagine Adam and Sharon kissing, and she’ll move her hand while no one is looking.

In the hallway, Adam will tell Sharon that this is all his fault because he cut the power to the Chancellor Communications building. Sharon will reassure Adam that he’s not to blame.

Later, Adam will talk with Chelsea, wondering if she hates him. Chelsea will have some internal dialogue with herself, saying that she won’t give up and she won’t lose her son.

Adam will get an idea and call Sharon, then he’ll show up at Sharon’s house to talk. Adam will want to bring Connor Newman (Judah Mackey) home to spur Chelsea to recover.

Sharon will advise against bringing Connor home since it could have negative repercussions on both Connor and Chelsea. Adam will thank Sharon for her advice, and he’ll reach out and take her hand, telling her that he doesn’t know what he’d do without her.

Just then, Rey Rosales (Jordi Vilasuso) will walk into the room looking appalled.

Finally, back at the penthouse, Chelsea will move her hand slightly once again. The nurse will enter the room, but she won’t see Chelsea move.

Keep on tuning into Y&R so you don’t miss any of the great drama that’s headed your way! And be sure to check out CDL’s newest posts for all the latest Young and the Restless spoilers, updates, and news. We’ve got you covered!

Next week on #YR, Rey gives Sharon an ultimatum, Amanda encourages Devon to open up, and Nate senses that something is wrong. pic.twitter.com/wcoPHWXRVh