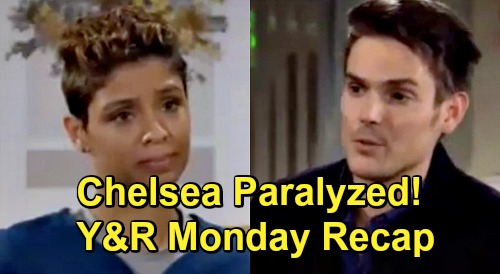 The Young and the Restless spoilers recap for Monday, January 4, tease that Sharon Rosales (Sharon Case) and Rey Rosales (Jordi Vilasuso) will pack and prepare for their Miami honeymoon at Sharon’s place. Arturo Rosales (Jason Canela) will wish Sharon and Rey well and he’ll say that his heart is full with the addition of Sharon to the family.

At the Grand Phoenix, Nick Newman (Joshua Morrow) and Phyllis Summers (Michelle Stafford) will talk happily after their evening together in Phyllis’ suite.

Nick will note that he likes waking up with Phyllis, and she’ll wonder if he means that he wants to make things permanent with marriage. Nick won’t think so, and neither will Phyllis.

Phyllis will then tell Nick about Adam Newman (Mark Grossman) being at Society last night during Sharon and Rey’s wedding. Phyllis and Nick will head down to the lobby, where they’ll briefly discuss Phyllis paying Nick back for the hotel loan.

Phyllis will seem coy about how she is going to get the money, and Nick will wonder if he should be worried.

At the hospital, Adam will talk with Elena Dawson (Brytni Sarpy), who will tell him that Chelsea Lawson (Melissa Claire Egan) suffered a stroke and that she lost mobility on her right side and can’t speak.

Adam will be devastated, and he’ll insist that he needs to see Chelsea, but Elena will say that Adam can’t see her due to risk of infection.

Over at Crimson Lights, Nate Hastings (Sean Dominic) and Elena will get coffee, and as they’re talking about Chelsea being found unconscious by Adam, Sharon will come along and overhear, then she’ll rush off and talk to Rey, who will wonder if Sharon’s thinking of reaching out to Adam.

Sharon will say that she’s not – it’s not her business.

Back at their table, Elena will apologize to Nate about their room service date, and she’ll say that she would like to continue seeing Nate to see where things go. Elena will also say that she wants to take things slowly, and Nate will suggest that they go out to dinner and have a fun date sometime. Elena will happily agree.

Back at the hospital, Adam will make calls to try to arrange to get into see Chelsea, to no avail. Finally, Adam will leave a message for Victor Newman (Eric Braeden) out of desperation.

Elena will come along to say there’s no change in Chelsea’s condition, and that with time and therapy she’ll hopefully be able to regain mobility and the ability to speak. Adam will be horrified.

Back at Sharon’s place, Sharon and Rey will return to pick up their things, and Sharon will urge Faith to hang out with Jordan while they’re gone. Faith will seem conflicted about that.

After Rey and Sharon go, Mariah will want to hang out with Faith, but Faith will just want to go to Nick’s place. Jordan will text asking where Faith is, but Faith will say that family things came up.

Back at Adam’s penthouse, Adam will return upset, and soon Connor Newman (Judah Mackey) will call to see how his mom’s surgery went. Adam will lie and tell Connor that it went well. Adam will finish his conversation with Connor, then he’ll throw things around in the penthouse out of frustration.

Finally, back at the Grand Phoenix, Sharon and Rey will arrive to pick up Arturo, and they’ll see Phyllis and Nick. Sharon will spill about Adam finding Chelsea unconscious last night, and Phyllis will ask when it happened.

After Rey and Sharon go, Nick and Phyllis will surmise that Adam must feel guilty for being at the wedding last night instead of with Chelsea.

Monday’s episode of Y&R is going to be terrific, so stay tuned to the CBS soap! We’ll keep you informed of all the latest Young and the Restless spoilers, updates, and news.