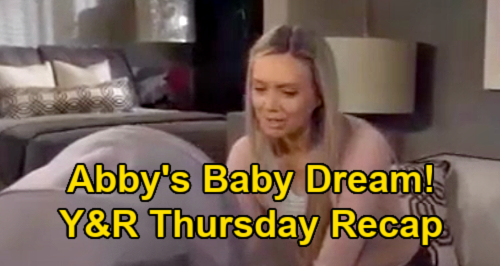 After considerable initial resistance, Traci will tell Jack about Abby Newman-Abbott-Chancellor’s (Melissa Ordway) inability to carry a child. Jack will be devastated for Abby, as will Traci.

As they discuss, Jack will note that Traci has been through the greatest loss a parent can face, and Traci will say how much she wants her daughter Colleen Carlton (Tammin Sursock) back.

Jack will worry that he might have put too much pressure on Abby with the “teardrop of love” legend about finding a perfect future, but Traci will say that Jack gave them all a great gift.

Traci and Jack will continue talking about family, and Traci will compare Jack to their father John Abbott (Jerry Douglas). Jack will get choked up over that, and he and Traci will round out their conversation on a positive note as they discuss their sibling relationship.

Meanwhile, at the Chancellor mansion, Abby will be upset, and she’ll imagine Chance Chancellor (Donny Boaz) on the phone talking with his mother and lamenting about how they can’t have a good future now.

A short time later, Abby will decide that she needs to go out and take a drive alone. Chance will want to accompany Abby, but she’ll need to be alone.

Victor Newman (Eric Braeden) will drop by the mansion to check on Abby, but he’ll learn that Abby’s gone. Victor will sit down with Chance, who will feel like Abby has taken too many hits lately.

Victor will have a nice talk with Chance, and he’ll like what he hears from his son-in-law, as Chance says that he’s willing to change his vision for what having a family looks like.

At Society, Abby will walk into the empty and dark restaurant, and she’ll imagine seeing Victor and Nikki Newman (Melody Thomas Scott) at a table talking.

Victor and Nikki will lament about Abby’s heart being broken but still having options. Abby will then snap out of her little vision, and she’ll leave the restaurant.

Next, Abby will turn up at Crimson Lights, where she’ll encounter Mariah Copeland (Camryn Grimes). Abby will worry that Chance is pitying her, and Mariah will gently tell Mariah that nobody pities her or thinks that she’s broken.

Mariah will point out that none of this is Abby’s fault, and she’ll urge Abby to go home and get some rest. The Young and the Restless spoilers indicate that Mariah will in fact offer to be Abby’s surrogate!

Abby will head over to the Grand Phoenix, where she’ll ask Phyllis Summers (Michelle Stafford) for a suite. Phyllis will initially assume that Abby had a fight with Chance, but Abby will say that’s not the case, and when Abby starts crying, Phyllis will get weirded out and comp her a room.

Up in Abby’s suite, she’ll sadly lay on the bed and fall asleep. The next morning, Phyllis will see Victor, who’s at the hotel for a business meeting. Phyllis will relay that Abby checked into the hotel last night.

Meanwhile, up in Abby’s room, Abby will dream that she wakes up to find a baby carriage in her room. Abby will soothe the baby in her dream, then she’ll wake up alone in the suite.

Abby will head down to the lobby, where she’ll see Victor and Phyllis. Abby will take off for home, and Phyllis will fish for information from Victor as to what’s going on. Victor won’t spill.

Abby will return to the Chancellor mansion, where Chance will be happy to see her. Abby will say that they need to talk, and Chance will agree. Chance will tell Abby that he’s in love with her, and that he doesn’t want to fix this for her or tell her how to feel, but that he wants to be right next to her through all of this.

Abby will say that’s what she wants, too, and that she’s realized that they can still have kids and that they need to look at all the options. Chance will agree, but he won’t want Abby to rush for his sake.

Thursday’s episode is going to be great, so be sure to stay tuned to the CBS soap! Here at CDL, we’ll keep you informed about all the latest Young and the Restless spoilers, news, and updates. We’ve got you covered!