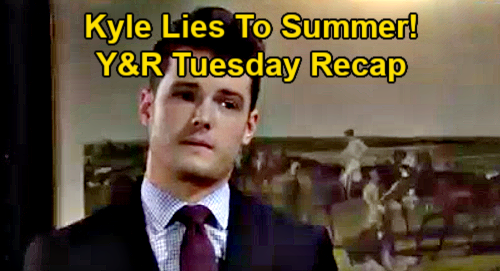 The Young and the Restless spoilers recap for Tuesday, February 9, tease that Amanda Sinclair (Mishael Morgan) will show up at Devon Hamilton’s (Bryton James) penthouse with groceries to make a special dinner for the two of them.

Amanda and Devon will flirt and enjoy each other’s company at they share wine and cook dinner together.

Amanda will share that she got her special recipe from her favorite foster mom when she was younger, then after her story, she’ll ask Devon to share something from his past.

Devon will share that he went deaf when he was younger, and after the evening progresses, more flirting will ensue, and Devon will offer to make breakfast in the morning. Amanda and Devon will make their way up to the bedroom together happily.

Elena will gush about the great time she’s having, but when Nate says that he wants to make her happy, Elena will say, “You’ve made my heart so full, Devon.”

Elena will apologize, and she’ll work hard to reassure Nate that she fully wants to be there with him.

Elena will say that there’s no one she’d rather be with than Nate, and that her heart and mind is right there with him.

At Society, Sally Spectra (Courtney Hope) will find Jack Abbott (Peter Bergman) at the bar. Sally and Jack will talk happily as Jack praises her positive outlook on life and her tendency not to give up.

After some talk about Jack’s life travels, Sally will mention that she wants to travel but needs someone to show her around. Jack will then pull back a bit from the conversation, saying that sometimes discovering places on one’s own is the best.

Sally will take that as a hint that perhaps she’s coming on too strong, and she’ll excuse herself to go back home and work, saying that she hopes that she and Jack can do this again sometime soon.

Phyllis will tell Nick about how Kyle and Summer are off talking about something big having to do with Sally, and she’ll wonder what it is.

Suddenly, Sally will walk into the hotel and meet Nick for the first time. Nick will seem charmed when Sally mentions his Restless Style days. This will exasperate and annoy Phyllis.

Sally will tout her promotion at Fenmore’s, and Phyllis will snark while Nick stands by. After Sally goes, Phyllis will tell Nick that she’ll make Sally wish that she’d never set foot in Genoa City if she hurts Summer.

At the Abbott mansion, Summer and Kyle will talk. Kyle will tell Summer about Theo Vanderway’s (Tyler Johnson) visit, and about how now Sally knows some damaging information about him.

Kyle will tell Summer about his affair with Tara Locke and how Tara is married to ruthless mogul Ashland Locke.

However, Kyle won’t tell Summer about Theo’s claim that Tara had his baby. Kyle will simply say that Ashland would come after him and his family if he found out the truth about the affair.

Summer will think that Kyle should go public with the information first and get ahead of it and neutralize Sally, but Kyle will refuse.

Kyle will insist that they should do nothing, and that if Ashland finds out about this, then there’s no coming back from it. Summer will rant about how she thought she had Sally right where she wanted her.

Summer will agree to do nothing, but she’ll say someday there will be a reckoning and Sally will be the one who pays. Summer and Kyle will then head back to the Grand Phoenix, where they’ll bump into Nick and Phyllis in the lobby.

That was an amazing episode of Y&R, and there’s much more coming tomorrow, so stick with the CBS soap! Here at CDL, we’ll keep you up to speed on all the latest Young and the Restless spoilers, updates, and news. Stick with us!