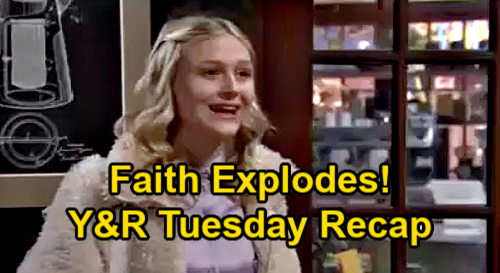 Nikki will think that she should have a heart to heart with Faith, and that this Jordan person sounds like bad news. Sharon will say that she and Nick Newman (Joshua Morrow) are trying not to overreact, but that they need to do something.

Nikki will note that if Faith is struggling but putting up a front, then that’s a big warning sign.

At the Chancellor mansion, Victor Newman (Eric Braeden) will drop by to comfort Abby Newman-Abbott-Chancellor (Melissa Ordway) and to try to help. Victor will get immediate consultations with specialists who will offer second and third opinions, but these physicians will agree with Abby’s original diagnosis.

Later, Chance will find Abby asleep in the living room, clearly exhausted from her emotional strain.

Meanwhile, back at Crimson Lights, Nikki will be reassuring Sharon when Faith shows up and quickly realizes that Sharon has told Nikki about her drinking. Faith will be furious with Sharon, saying that she doesn’t need to talk with Nikki or therapy.

Sharon will realize that Faith overheard her conversation with Nick about therapy, and Faith will tell her mother to leave her alone.

At the Grand Phoenix, Amanda Sinclair (Mishael Morgan) and Elena Dawson (Brytni Sarpy) will catch up. Amanda will tell Elena all about her situation with her birth mother and half-sister, and she’ll say that Devon Hamilton (Bryton James) has been her rock throughout all of this. Elena will seem saddened by this.

At Chancellor Communications, Lily Winters (Christel Khalil) will manage to persuade Nate Hastings (Sean Dominic) to be the spokesperson for “Ask MD Now,” and through their conversation, Nate will learn that Lily is dating Billy Abbott (Jason Thompson).

Nate will caution Lily about Billy, but Lily will insist that Billy has changed.

Over at Society, Lily will encounter Devon, who will share that Moses Winters (Dax Randall) may be coming to Genoa City. Lily will tease Devon a little about that sparkle in his eye when he talks about Amanda.

Later, Amanda will arrive to meet Devon for lunch, and Devon will share that Lily thinks there’s more going on between them than friendship.

Back at the Grand Phoenix, Elena and Nate will meet in a suite since Nate’s house is undergoing a massive remodel. After talking about Amanda and Devon getting closer, Nate will say that it’s natural for Elena to still have feelings for Devon. Elena will say that she wants their relationship to work.

Later, Elena and Nate will make love, and afterwards Elena will dream about being in bed with Devon. Elena will wake up to find Nate looking at her happily, and she’ll fib and say that everything’s fine and that she just forgot where she was for a moment.

The Y&R drama is really heating up, so stick with the CBS soap and don’t miss Tuesday’s episode! Here at CDL, we’ll keep you current with all the latest Young and the Restless spoilers, updates, and news. We’ve got you covered!