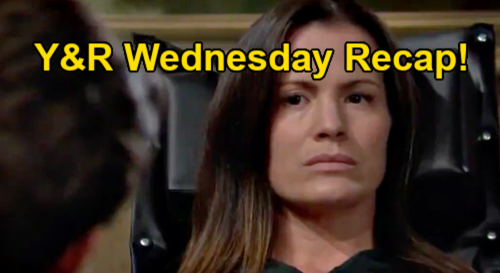 The Young and the Restless spoilers recap for Wednesday, February 24, tease that Billy Abbott (Jason Thompson) and Lily Winters (Christel Khalil) will enter the Grand Phoenix lobby, but Billy won’t be in the mood to call it a night.

Billy will head out for a drive as Devon Hamilton (Bryton James) walks in. Devon will chat with Lily, telling her about his plan to be Abby Newman-Abbott-Chancellor’s (Melissa Ordway) sperm donor.

Lily will question Devon’s decision to make sure it’s right for him, and he’ll explain how he wants to step up for one of his best friends. Meanwhile, across the lobby, Nick Newman (Joshua Morrow) will talk with Faith Newman (Alyvia Alyn Lind) via phone, reassuring her that everything will be ok.

At Sharon’s house, Rey Rosales (Jordi Vilasuso) will arrive, all upset about the photo, which he’ll show Sharon on his phone.

Rey will demand answers, and Sharon will explain that Adam pulled her into the kiss, but she won’t be able to say that Adam forced the kiss. Rey will be furious, and he’ll leave.

Later, Nick will show up to tell Sharon that Faith wants to live with him full-time for now, and that Faith feels that Sharon chose Adam over her.

Sharon will insist that she’s not having an affair with Adam, and she’ll ultimately agree that it’s best for Faith to live with Nick while she patches things up with Rey.

At Adam’s penthouse, Victor Newman (Eric Braeden) will show up to talk about the photo, and Chelsea Lawson (Melissa Claire Egan) will see enough to know that Victor showed Adam something on his phone. Chelsea will wonder what’s going on as Victor and Adam step out into the hallway to talk.

Later, Rey will barge into the penthouse to tell Adam to stay away from Sharon. As Rey and Adam are arguing about the picture, Chelsea will again wonder what has happened.

Once Rey has said his peace and left, Chelsea will try to reach for her phone, which is sitting on the little table by her wheelchair.

Adam will get Chelsea’s caretaker to start a bath for her, and while Adam leaves and the caretaker is out of the room, Chelsea will manage to get her phone in her hand, and she’ll see the kiss picture and be horrified.

At Victoria Newman’s (Amelia Heinle) house, Billy will arrive, and he’ll fish for information until he learns that it was Victor’s idea to acquire Ashland Locke’s media company.

Billy will urge Victoria to squash the deal, and he’ll basically say “I told you so” about Victor not letting Victoria have free reign as CEO.

Later, once Billy’s gone, Victor will drop by the house to talk about the acquisition of Ashland Locke’s company. Victoria will balk, saying that Victor wants to use the company as a weapon to destroy Billy.

Victor will admit it, and Victoria will again balk. Victor will urge Victoria to join him, saying she has it in her.

Back at Sharon’s house, Adam will arrive to talk with Sharon, and inexplicably, Sharon will let him in. Adam will say that Rey came to the penthouse and threatened him, and he’ll tell Sharon that he can’t stop thinking about their kiss. Sharon will make Adam leave, and he’ll reluctantly go.

At Society, Nick will find Rey drinking alone at the bar. Rey won’t be in the mood to talk, and he’ll lash out at Nick, bellowing that every time he turns around, there’s a Newman ex interfering in his life with Sharon.

Nick will talk Rey down and he’ll urge Rey not to give up on Sharon. Rey will then get a text from Sharon, but he won’t answer.

Back at the Grand Phoenix, Devon will be leaving from his conversation with Lily as Billy returns from Victoria’s house. Billy and Lily will talk about his visit with Victoria, and they’ll agree not to pursue Ashland Locke’s company and avoid getting into a bidding war with Newman Enterprises.

Back at Adam’s penthouse, Adam will return, and a visibly upset Chelsea will put her phone back on the side table. Adam will turn on the charm, saying that he rushed home to see her, but then he’ll notice that she’s upset. Adam will tell Chelsea that everything is ok, while Chelsea internally fumes.

Y&R is on fire right now, so stay tuned! Wednesday’s episode is going to be terrific, and we’ll give you more updates as we get them. You can count on CDL for all your Young and the Restless news and spoilers.