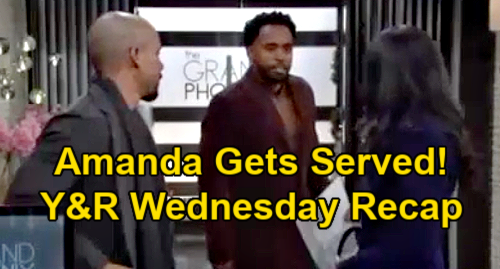 The Young and the Restless spoilers recap for Wednesday, January 13, tease that Sharon Rosales (Sharon Case) and Rey Rosales (Jordi Vilasuso) will return to Genoa City from their honeymoon.

Sharon won’t be too keen on the fact that Nick let Faith skip school for the brunch, and after Rey and Mariah head to work, Sharon and Nick will discuss Faith privately. Sharon will think that Faith seems to be overcompensating and hanging on her every word, but Nick won’t have noticed it.

As Faith listens from the staircase, Nick will tell Sharon that he learned that Jordan (Madison Thompson) was with Faith the two times she was drinking. Sharon will wonder if Jordan has something to do with the changes they’re seeing in Faith, and she’ll float the idea of sending Faith to a therapist.

Faith will be aghast to hear about the prospect of going to therapy, and Nick won’t be thrilled with it either. Nick will suggest having Nikki Newman (Melody Thomas Scott) talk to Faith about drinking, but Sharon will strongly advocate for a therapist.

After Nick goes, Sharon will call Faith downstairs, and they’ll head to Crimson Lights together.

At Crimson Lights, Jordan will be waiting for Faith. Jordan will be sweetly nice to Sharon, and when Sharon’s out of earshot, she’ll chastise Faith for bringing her mother with her.

Faith will say that she didn’t have a choice, and she’ll tell Jordan that they need to be more careful going forward with their partying.

On the Jabot Jet, Billy Abbott (Jason Thompson) and Lily Winters (Christel Khalil) will celebrate their acquisition of “Ask MD Now,” but Billy won’t want to talk business; he’ll want to know how Lily feels about his affair with Summer Newman (Hunter King) and whether they can move past it. Lily and Billy will then proceed to have a long, drawn-out talk about the situation.

Lily will note that Billy has a pattern – he gets hurt and then hurts others without considering the fallout. Billy will wonder if Lily has been rethinking things between them, and Lily will say that it was honest and brave of Billy to admit what he did.

Lily will want to move forward with their relationship, but she’ll say that his recklessness and carelessness needs to stop.

Lily will then ask Billy to discuss some things about her that he’d like to change, and Billy will say nice things about Lily, including that she could be more spontaneous and that she might take care of herself as much as she takes care of others. Ultimately, Billy and Lily will end their conversation on a good note.

After rehashing much of the conversation, Amanda will say that the whole experience was terrifying and cathartic, and Devon will wonder how Amanda is going to just go back to her life.

Devon will also ask Amanda what’s next for her and Naya, and Amanda will say that she doesn’t imagine having a relationship with Naya at all. Devon will relay his story about initially cutting Tucker McCall (Stephen Nichols) and Katherine Chancellor (Jeanne Cooper) out of his life and how he got over it.

Amanda will think that she won’t get from Naya what she’s always wanted in a mother – unconditional love. Amanda will get emotional thinking about this, and Devon will distract her with breakfast.

Later, after Devon walks Amanda back to the Grand Phoenix, Amanda will get served with papers in the lobby and wonder what’s going on.

It sounds like a lot of Y&R drama is heating up for Wednesday’s episode, so stay tuned! Remember, CDL is your go-to spot for all the latest Young and the Restless spoilers, updates, and news. We’ve got you covered on all the soaps!