The Young and the Restless Spoilers: Sally Fights Back – Tells Nick About Summer & Billy’s One-Night Stand? 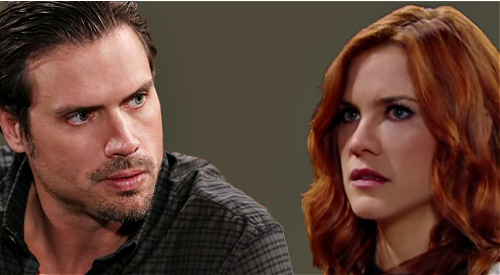 The Young and the Restless spoilers tease that Summer Newman (Hunter King) may be playing with fire. As Y&R viewers know, Summer is currently on a mission to get dirt on her nemesis Sally Spectra (Courtney Hope). Summer and Kyle Abbott (Michael Mealor) are in Los Angeles and hope to unearth damaging information against Sally.

Well, all indications are that Summer and Kyle will get the intel they need to hang over Sally’s head.

While talking to Wyatt Spencer (Darin Brooks) and Flo Fulton (Katrina Bowden) over at Spencer Publications, it looks like Flo is going to spill Sally’s dirty secret – that Sally faked a terminal illness last year to try to hold onto Wyatt.

Of course, Sally is going to be incensed when Summer and Kyle return with their arsenal of information. Perhaps Summer will tell Sally that she knows all about the faked terminal illness but she won’t use the information if Sally backs off trying to get the Jabot Collective (JCV) position and undermining Summer.

Whatever the case, we’d be very surprised if Sally just sits by and lets all this happen. In fact, Sally might try to dig up dirt on Summer in retaliation, and if so, there’s a big secret that she could find about Summer…Summers’s one-night stand with Billy Abbott (Jason Thompson).

The topic of that one-night stand came up on a recent episode in which Billy confessed the affair to Lily Winters (Christel Khalil).

Summer’s evening with Billy is something that she’d definitely NOT want to get out, since there are a lot of people in her life who don’t know about the tryst who would be outraged by the whole thing.

Summer’s dad Nick Newman (Joshua Morrow) doesn’t know about how Billy and Summer hooked up, and he’d of course be livid with Billy if he knew the truth.

And then there’s Summer’s grandfather Victor Newman (Eric Braeden), who would be incensed with “Billy Boy” if the truth were to come out. This would be something that Summer would rather not deal with, and she’d surely like for the secret about her night with Billy to be never known by her dad and grandfather.

So, if Sally were to get her hands on this secret about Summer, then she could fight back, or even threaten to expose Summer’s secret if certain terms aren’t met.

And at the very least, Sally could lord the Billy secret over Summer, threatening to go spill the whole thing to Nick and/or Victor if Summer uses what she knows about Sally’s fake death ruse.

Or Sally might just go the straight revenge route and run right to Nick and/or Victor and “accidentally” spill the beans.

We’ll see what happens here, but there could be the potential for some serious damage to Summer and to Billy is Sally were to find out the truth. All it will take is a little digging on Sally’s part and perhaps some lurking and listening to some key conversations.

Do you think that Sally will stumble upon Summer’s secret and use it to her advantage? Stay tuned to the CBS soap and we’ll keep you informed about all the latest Young and the Restless spoilers, updates, and news. We’ve got you co