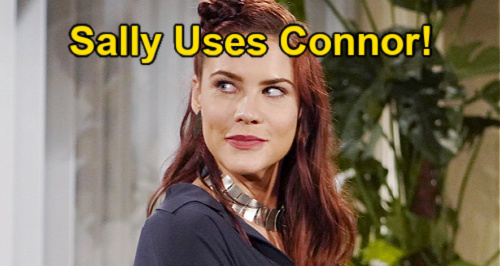 The Young and the Restless (Y&R) spoilers tease that Sally Spectra (Courtney Hope) will befriend Connor Newman (Judah Mackey), so she’ll end up using Adam Newman’s (Mark Grossman) son to her advantage. A surprising bond will form after some Sharon Rosales (Sharon Case) drama goes down, so let’s talk about what’s in store.

After Adam lets Connor know he’s no longer a couple with Chelsea Lawson (Melissa Claire Egan), the news will hit the boy hard.

Connor wants to be a united family with his parents, so it’ll be tough to hear that won’t be possible moving forward.

Y&R fans know Connor has fixated on Sharon Rosales (Sharon Case) as a hurdle to his mom and dad’s romance in the past.

It turns out Connor will once again view Sharon as the problem, so he’ll have a bit of a meltdown and act like this is all Sharon’s fault.

Connor will end up stomping off to the park, where he’ll cross paths with Sally and get a proper introduction.

Sally may admit she works with Connor’s dad and thinks he’s pretty cool. She’ll manage to get Connor to warm up to her, which could be a game-changer when it comes to Sally’s chance at a romance with Adam.

If Connor accepts that Adam and Chelsea’s reunion isn’t going to happen, he just might latch onto Sally as the next best thing. It’s easy to imagine Connor deciding to play matchmaker, which would probably delight Sally.

Of course, we should note that when Chloe Mitchell (Elizabeth Hendrickson) offered a warning about Connor, it seemed to genuinely affect Sally. With that in mind, Sally probably won’t go into this situation with the desire to be manipulative.

Even so, Sally is an opportunist at heart and surely won’t mind if Connor wants to put in a good word for her with Adam!

Sally can still use Connor to her advantage without it being some sinister thing, especially if Connor takes it upon himself to root for Adam and Sally as a new couple.

Regardless, Sally will text Adam to let him know Connor’s safe and hanging out with her. That should earn Sally some points with Adam and hopefully swing things back in a romantic direction sooner or later.

The Young and the Restless spoilers say Adam will face some tricky dilemmas in the coming episodes, so don’t miss what’s ahead.

CDL’s where you want to be for terrific Young and the Restless spoilers, news and updates, so be sure to check back often.