The Young and the Restless Spoilers: Sally Chases After Nick Next – Phyllis Payback After Ugly Downfall? 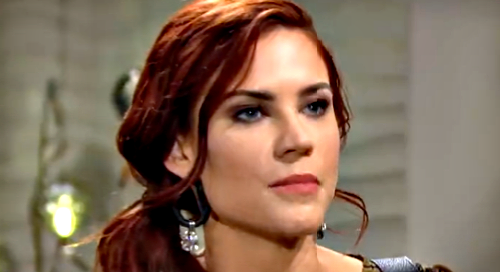 The Young and the Restless (Y&R) spoilers tease that Sally Spectra (Courtney Hope) may chase after Nick Newman (Joshua Morrow) next and get some Phyllis Summers (Michelle Stafford) payback. Could this be how the character sticks around following her ugly downfall?

Sally came to GC for a fresh start after turning her life into a total train wreck back in LA. The Bold and the Beautiful fans know Sally really went off the rails as the writers painted her into a terrible corner.

Now we’re seeing something similar happen on Y&R. Sally is on the verge of blowing her second chance with Jack Abbott (Peter Bergman) and will inevitably lose her job running JCV as well.

It’s clear that Sally’s life is going to be blown to bits both personally and professionally, so where will that leave her?

Sally’s going to be right back where she started with nothing to show for all these months of hard work – well, hard scheming anyway! She has no real friends in town, so what will be left for her after Phyllis takes her down?

No one would blame Sally for packing up and hitting the road – ready to search once again for a fresh start where no one knows her messed-up history.

However, Courtney Hope is an excellent actress that many viewers would hate to lose. Sally is also a fun character since we need troublemakers like her to create drama.

The problem will simply be giving Sally something else to do, but perhaps that’s fairly easy to figure out considering how much she hates Phyllis.

This seems like the perfect opportunity for Sally to get revenge on Summer Newman’s (Hunter King) mom since Phyllis will indeed be the one to sink her.

Phyllis is awfully protective of Jack, so maybe Sally could use that to her advantage.

Sally might try to create some insecurities for Nick and stir up some jealousy. She could position herself to be the one Nick turns to and trust that her trademark charm will get the job done.

Nick is no stranger to cheating and could easily fall prey to Sally’s good looks and feistiness. Sally is a lot like Phyllis, so she might be able to reel Nick in and possibly even fall in love for real.

It’d be a great way to keep this Sally and Phyllis rivalry going strong, which might be necessary if the show’s going to keep Sally around.

The Young and the Restless spoilers say Sally will need a new story and a new love interest once Phyllis crumbles her world.

Going after Nick for revenge could check off all the right boxes, so let’s hope that’s what the writers have in store!

CDL’s your go-to source for sizzling Young and the Restless spoilers, updates and news, so stop by regularly.