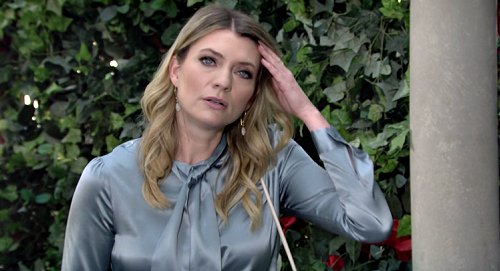 The Young and the Restless spoilers reveal that Tara Locke (Elizabeth Leiner) had big family plans for Kyle Abbott (Michael Mealor). Now that the truth is finally coming out, Kyle will reconnect with Summer Newman (Hunter King). One Tara realizes that the jig is up, will she leave town with Harrison Locke (Kellen Enriquez)?

Y&R spoilers reveal that Kyle and Jack Abbott (Peter Bergman) are learning that Tara isn’t the person that she pretended to be. Tara’s scheme is falling apart and she has nothing to fall back on.

It even appears as if Tara’s collaboration with Lauren Fenmore Baldwin (Tracey E. Bregman) is unraveling.

Kyle wanted answers regarding her intentions, Summer leaving and her real relationship with Sally Spectra (Courtney Hope). Tara tried to play mind games and cover for a bit but he wasn’t falling for it.

Tara knows that her time is up, especially when she eavesdropped on Kyle’s phone call. He reached out to Summer but all he could get was the voicemail.

Kyle left a message saying he still loves her and if she would call him back. It is teased that Kyle will make a bold move and Summer will offer an apology.

No Legal Rights To Harrison Locke

The Young and the Restless spoilers reveal that Jack suggested that Kyle confront Tara. It is confirmed that Kyle admits to being scared of Tara disappearing with Harrison forever.

Kyle can’t bring himself to even think about never seeing Harrison again. Each time he thinks about confronting Tara, he is reminded that he has no legal rights to Harrison.

So, if Tara did flee Genoa City with Harrison, there would be nothing Kyle could do about it.

The Young and the Restless Spoilers: Paternity Bombshell

What would be a great ending is if Ashland Locke (Richard Burgi) and Victoria Newman (Amelia Heinle) asked for sole custody. Then, Ashland could arrange it so Kyle could keep bonding with the little boy.

Even though Ashland and Kyle don’t see eye-to-eye, they both love Harrison and both were Tara’s victims.

However, it is more likely that Tara and Harrison move away from Genoa City. Phyllis Summers (Michelle Stafford) and Ashland both have been bringing up that Tara lied about Harrison’s paternity for years.

So, it’s quite possible that Tara lied about it again, even going as far as to tamper with the last paternity test. With no genetic link to Harrison, it would be easier to write out “Skyle.” Plus, Kyle and Summer could pick up where they left off.