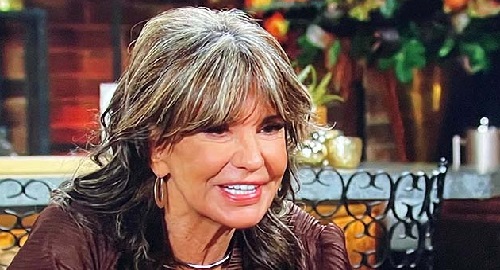 The Young and the Restless (Y&R) spoilers recap for Thursday, December 2, reveals that Devon Hamilton (Bryton James) will be upset over Dominic Newman-Abbott-Chancellor going home while Jill Abbott (Jess Walton) pushes Adam Newman (Mark Grossman) to come up with a Plan B. Let’s discuss all the drama that’s brewing on Thursday’s Y&R episode.

At the Chancellor mansion, Billy Abbott (Jason Thompson) will insist he can make peace with Jill selling ChancComm – just not to Adam and Victor Newman (Eric Braeden). When Jill makes it clear that she’ll do what’s best for the business, Billy will feel like she’s siding with the Newmans over him.

Jill will want to know why Billy was willing to risk everything to reignite his feud with Victor and Adam, but Billy will correct her on that. He’ll argue this was initially about protecting his kids from the “Lockeness Monster” – especially since he already lost one child and wasn’t going to let it happen again.

Jill will point out that there’s never been any hint that Ashland was a threat to the children and won’t think Victoria Newman-Locke (Amelia Heinle) would bring danger around them. Since Jill still won’t have a real answer for why Billy was so determined to stop the wedding, she’ll ask if it’s because Billy still has feelings for Victoria.

Billy will contend that he’s strictly co-parents with Victoria, so Jill will suggest that maybe this was about satisfying the gambler’s rush. After Billy says he was trying to protect ChancComm from Victor’s threat, Jill will guess she gave Billy too much power before he was ready.

Billy will acknowledge that Jill wants to give him a soft place to land and will have no interest in the COO position at Chancellor Industries. After Jill fires back about Billy being “so damn impulsive,” he’ll ask if that’s what she’s been wanting to say throughout this whole conversation. Billy will sarcastically thank Jill for that before he takes off.

At Crimson Lights, Billy will bump into Adam, who’ll ask how he’s enjoying early retirement. Regardless of what happens with the multiple offers on the table, Adam will gloat about no one wanting Billy attached to ChancComm. He’ll feel like Billy paid the price for releasing that exposé and will take sweet satisfaction in that.

After Adam reminds Billy that he brought all this on himself, he’ll head out and leave Billy deep in thought at a table. Billy will flash back to Adam’s warning early on about how everything would blow up in his face.

Back at the Chancellor mansion, Adam will show up to discuss the future of ChancComm. He’ll think Jill is a smart woman who won’t let personal issues get in the way of what’s best for business. Jill will feel like Adam just wants to salvage the mess he’s made and get back in Daddy’s good graces. She’ll know Adam’s plan was to trash Billy, shrink ChancComm’s value and pick it up at a bargain price.

“Ain’t gonna happen, buddy!” Jill will warn Adam. She’ll urge him to brainstorm a Plan B, so Adam will thank Jill for the advice before exiting. Jill will then chuckle to Katherine Chancellor’s (Jeanne Cooper) portrait and ask if she can believe that guy.

At Devon’s penthouse, he’ll get a visit from Lily Winters (Christel Khalil). Lily will admit she could use some advice and will explain Jill’s job offer along with how tough everything’s been on Billy. Lily will worry about where Billy’s anger will be directed and will want to help him.

After Lily talks about how she never feels like her relationship is in jeopardy despite all the drama, Devon will see how in love she is. He’ll think Lily just needs to make sure Billy knows that.

Afterward, Lily will find Billy sitting alone at the coffeehouse and question him about it. Billy will admit he’s been thinking something through, but he won’t be ready to share any details yet. He’ll make it clear that he rejected Jill’s job offer and will find a solution that doesn’t involve a handout.

Billy will assure Lily that he always gets up after he’s knocked down. He’ll think Lily can count on that – and so can Adam. On the patio, Mariah Copeland (Camryn Grimes) will take a break from work to have coffee with Tessa Porter (Cait Fairbanks). She’ll be irritated over Abby Newman-Abbott-Chancellor (Melissa Ordway) leaving the baby, but Tessa will offer reassurance.

When Noah Newman (Rory Gibson) arrives, he’ll join the ladies before admitting he finally had a chance to listen to Tessa’s songs. Noah will tell Tessa that he loved them and that he’ll always give her honest feedback. He’ll want to listen again and let the music sit with him for a bit before he presents album cover ideas.

After Tessa steps out to take her manager’s call, Mariah will talk about being in a really good place with Tessa after a chaotic few months. Noah will insist he’s genuinely glad for them, which isn’t always easy when he remembers why they got together in the first place. He’ll add that it can sometimes be harder than it sounds.

“Wow, somebody really did a number on you,” Mariah will reply. She won’t push too hard since Noah won’t want to talk about London and will instead just be happy her brother is back in Genoa City.

After Mariah sends Christian Newman’s (Alex Wilson) peewee basketball schedule to Noah, Tessa will return to the table. She’ll look at some art samples on Noah’s phone and decide they have the same vision, so she’ll excitedly declare they should get to work. Mariah will seem a little uncomfortable as watches Noah and Tessa’s interaction.

At Society, Amanda Sinclair (Mishael Morgan) and Imani Benedict (Leigh-Ann Rose) will celebrate being a step closer to their new law firm. They’ll have Champagne as they discuss their hunt for the perfect office space, which will lead to some mild bickering for the sisters.

However, Imani and Amanda will eventually compromise on a converted Victorian building that they both love. After Amanda says they should put down the deposit, they’ll share a toast to Sinclair and Benedict Attorneys at Law. Imani will tease Amanda about how maybe her name should come first as they continue bonding.

Once Amanda comes home, she’ll fill Devon in on their office hunting success while Dominic Newman-Abbott-Chancellor’s with the nanny for a bath. Devon will proudly reveal that Dominic reached up and shook his favorite rattle all by himself. He’ll joke about colleges with Amanda before taking a call about Abby being found safe.

After Devon hangs up, he’ll relay that Ashley Abbott (Eileen Davidson) and Jack Abbott (Peter Bergman) are bringing Abby back with them. Devon will guess that Abby must be fine since they’re going to come there to pick Dominic up and take him home. He’ll seem upset over the realization that Dominic won’t be living there anymore.