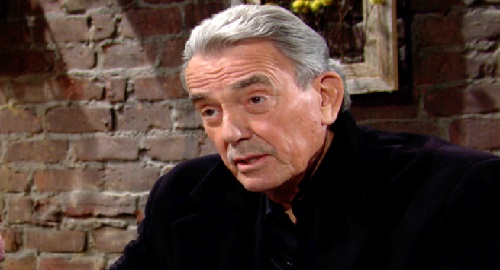 For starters, Lily will play it cool during her next run-in with Victoria. Although Victoria will be curious about Billy’s current emotional state as well as his plans, Lily will probably be pretty evasive. She’ll no doubt assure Victoria that everything’s under control – no thanks to Victoria since she supported Ashland Locke’s (Richard Burgi) plot with the Newmans.

Of course, Victoria should congratulate Lily on the promotion and worry about the toll all this is taking on Billy. She may insist her offer to buy ChancComm will help Billy in the long run, but Lily won’t think they need any favors.

Lily will avoid giving out too much info, especially since she won’t want to tip Victoria or anyone else off to Billy’s secret scheme. Billy wants to take down Victor and especially Adam Newman (Mark Grossman), so he’ll keep working to put all the pieces in place and make that happen.

As part of that plan, Billy will pretend to be drunk in front of Adam. He’ll act like he’s a total train wreck in the coming episodes – and it seems Adam will fall for it hook, line and sinker.

In the meantime, Victor will urge Adam and Victoria to put their differences aside. He may admit he thought Victoria and Adam turned a positive corner at the wedding, but they quickly fell back into old habits and have been feuding again.

Victor will make a demand of Adam and Victoria on Thursday’s Y&R episode. Contrary to popular opinion, Victor may argue that he takes no pleasure in pitting his children against each other. That doesn’t mean Victor’s opposed to a little healthy competition, but he may think Victoria and Adam need to separate their business and personal battles.

Whatever the case, Victor will spell out what he wants and expect his sparring children to rise to the challenge. Speaking of challenges, Noah was given one when Tessa asked him to listen to her songs and come up with some cover art.

Noah should impress Tessa with the work he’s done so far on Thursday’s show, but how will Mariah Copeland (Camryn Grimes) feel about all the bonding? Mariah had a strange expression the last time Tessa and Noah collaborated, so she may grow increasingly uncomfortable over the exes getting so close again.

Mariah tends to get jealous when Tessa reconnects with a former flame – and things are especially awkward since that former flame is Mariah’s brother. There are some hints about Tessa changing her mind down the road, so she may bow out of this arrangement if Mariah can’t handle it.

For now, Tessa will meet with Noah and excitedly see how the project’s shaping up. We’ll bring you updates as other Y&R news emerges. The Young and the Restless spoilers say some shockers and shakeups are still to come in Genoa City. CDL’s where you want to be for fantastic Young and the Restless spoilers, news and updates, so make us your go-to source.