BY Heather Hughes on September 28, 2021 | Comments: Leave Comments
Related : Soap Opera, The Young and the Restless 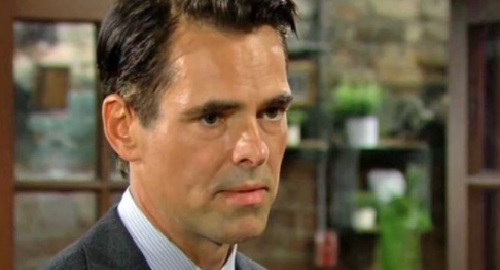 At ChancComm, Billy will bark at someone over the phone to get answers about Jesse Gaines’ (Jamison Jones) abrupt departure. When Jack arrives, he’ll get updates on Billy investigating why Victoria shouldn’t rush into marrying Ashland.

Jack will mention Nick being on a similar mission, but he won’t get what diabolical scheme Billy thinks Ashland has cooked up. Billy will recap what he learned about Ashland’s past at the meeting at the Newman ranch. He’ll point out that they don’t even really know if Ashland’s sick, but Jack will feel like Billy’s taking leaps of logic just to justify his digging.

Jack will argue that Billy’s just trying to stop Victoria from moving on, but Billy will think he’s capable of caring about his ex without being possessive or having an ulterior motive.

Meanwhile, Nick Newman (Joshua Morrow) will call Phyllis Summers (Michelle Stafford) and explain that he’s still in Atlantic City due to mechanical issues. He’ll admit that the lead he found took him down a bad rabbit hole, but he won’t want to get into it over the phone.

Nick will urge Phyllis to get on that plane to Milan with Jack and Traci Abbott (Beth Maitland), so she’ll have to admit Traci won’t be flying with them after all. Nick won’t seem to care about that and will insist he won’t miss Summer Newman’s (Hunter King) wedding. It’s just important to confront Ashland and get answers before Victoria says “I do.”

In Victoria’s office, she’ll be keyed up and will talk to Nikki Newman (Melody Thomas Scott) about her bridal gown issues. Nikki will think that some wedding anxiety is normal, but Victoria will admit she looked into Gaines after Billy brought him up.

Victoria will have even more questions – and Nikki will add to them when she mentions Ashland and Victor Newman (Eric Braeden) talking almost “conspiratorially” at the ranch. Although Victoria will appreciate Nikki’s info, she won’t like that having all these doubts so close to the wedding. Victoria will decide Billy is to blame for planting suspicions she just can’t shake.

As for Ashland, he’ll meet with his employee at Society and note that he won’t be needing that money after all. Ashland will then call Victoria and invite her to meet up with him for dinner. While Ashland’s waiting, he’ll spot Nate Hastings (Sean Dominic) entering the restaurant. Nate will decide to sit with Ashland since he’ll be waiting for Elena Dawson (Brytni Sarpy) as well.

After Nate checks on the groom’s health, Ashland will admit the last few days have been stressful. However, Ashland will be committed to focusing on his wedding from now on. Once Victoria and Elena arrive, Ashland will insist on turning this into a double date. Victoria won’t be happy about that and will sulk throughout the meal since she’ll be eager to confront Ashland.

When the dinner wraps up, Nate will talk to Elena about how distracted and intense Victoria seemed. He’ll suspect that Ashland isn’t doing as well as he seems to be. Back with an angry Victoria, she’ll push Ashland to come clean about what he’s keeping from her. Victoria will wonder if this is about his health, what Nick is doing in Jersey or perhaps Jesse Gaines.

Ashland will insist on going back to the office for a private conversation, so Victoria will once again demand honesty once they arrive. She’ll want Ashland to stop with all the vague reassurances and just tell her the truth.

Back at ChancComm, Nikki will come barging in and point out that Victor warned Billy about the consequences of interfering in Victoria’s happiness. Nikki will argue that Billy should defy Victor at his own risk – though she’ll add that Billy should worry just as much about defying her.

Billy will contend that Victoria has questions of her own and will act like Nikki should be glad about that. Nikki won’t appreciate Billy criticizing Victoria’s love interest after all the ways Billy already failed her. She’ll think Billy and his ego are trying to derail Victoria’s big day, but she’ll make it clear that Victoria will indeed marry Ashland.

Nikki will order Billy to back off and will suggest he shouldn’t show his face at the wedding since he’s no longer welcome there. At the Abbott mansion, Traci will find out from Phyllis that she might be flying alone with Jack to Milan. Traci will seem a bit uneasy over that information and will suggest they need to have a little talk over wine.

Phyllis will be pleasantly surprised when Traci just wants to catch up. They’ll be gabbing and laughing when Jack comes home, so he’ll enjoy seeing Phyllis and Traci getting along so well. After Jack learns Nick’s plane had mechanical issues, he’ll offer to file a later flight plan and have dinner with Phyllis in the meantime.

While Traci’s off finishing some work, Phyllis will wonder if Jack said anything to his sister about his love confession. Jack will deny it and will mention that he’s sticking to ginger ale tonight. He won’t want a repeat of pouring his heart and soul out, but Phyllis will insist Jack can do that anytime.

“Right back at you,” Jack will say with a warm smile. He’ll end up reminiscing with Phyllis as Y&R shows some great “Phack” scenes of the past. Jack will talk about how boundaries aren’t his strong suit, but Phyllis will assure Jack that she loves spending time with him like this.

Next, Nick will call to reveal that he made it back to Genoa City. He’ll just have something to do before he meets up with Phyllis and Jack. After Phyllis hangs up, she’ll talk to Jack about Ashland and admit Nick indeed found something. Phyllis will think it’ll be up to Victoria to decide what to do with it.

Back in Victoria’s office, she’ll push for answers from Ashland – the man she’s about to marry. Suddenly, Ashland will get a text from Nick demanding to see him now. He’ll mention that text to Victoria, who’ll wonder why Nick’s pushing for this meeting.

When Ashland says “we” will soon find out, Victoria will be surprised to learn she’s being included. At Crimson Lights, Nick will also be taken aback over Victoria showing up. Ashland will argue that whatever Nick has to say can be said in front of Victoria, too.

Victoria will rant about Nick ignoring her wishes by digging into Ashland’s past and will urge him to spill what this is all about. As other Y&R news comes in, we’ll keep you posted.