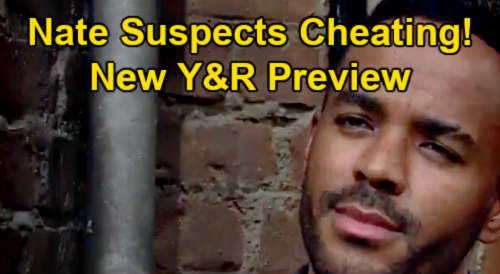 The Young and the Restless (Y&R) spoilers tease that Elena Dawson (Brytni Sarpy) is going to do her best to move on after her night with Devon Hamilton (Bryton James), but it might not be as easy as it first seemed.

The new Y&R promo for the week of February 1 is out, and it’s all about Devon and Elena’s big secret.

As Y&R viewers know, Elena was stuck with Devon in the penthouse during the ice storm. One thing led to another, and the exes seemed to be attempting to recapture what they used to have.

But according to Y&R spoilers, Devon and Elena will talk the next morning, and they’ll decide that they were trying to recapture something that’s clearly in the past.

Devon and Elena won’t call what they did a mistake, but they’ll decide that it’s best if Nate Hastings (Sean Dominic) and Amanda Sinclair (Mishael Morgan) don’t know about what happened. “So, we’re in agreement,” Elena says in the promo. “We’ll keep this to ourselves,” Devon agrees.

Of course, keeping a secret like this is going to be pretty difficult, especially for Elena, who’s currently in a relationship with Nate. Elena tends to wear her heart on her sleeve, and when something’s wrong, it’s usually written all over her face and body language.

In fact, it appears that Nate will soon question Elena when it seems that something’s troubling her. Y&R spoilers say that Elena will be feeling remorseful and she’ll react by suggesting that Nate take her on that romantic getaway that he wanted to do earlier.

But Nate will sense that something is awry with Elena’s newfound enthusiasm.

“Now I know something is wrong. I’m just asking you to trust me enough to tell me what’s on your mind,” Nate implores Elena in the promo.

But Elena insists that she’s fine as Nate looks at her quizzically. And it might not be long before Nate starts to wonder where exactly Elena spent the night during the ice storm.

It shouldn’t be too hard for Nate to put two and two together, but first he may want to talk with Devon about it. The promo shows Nate telling Devon that they need to talk, which initially alarms Devon.

However, it appears that Nate will want to talk about another topic – at least for now.

We’ll see how Elena’s week shakes out on the show, but it’s looking like she’s going to continue to fret about her secret from Nate while doing her best to move on.

One thing about Elena is that she tends to blurt out secrets after some buildup time, so you never know when she might spill the details to Nate!

It looks like we’re in for an exciting week, so stay tuned! We’ll give you updates as Y&R news comes in. Stick with the CBS soap and don’t forget to check CDL often for the latest Young and the Restless spoilers, updates, and news.