The Young and the Restless Spoilers: Week of September 27 Preview – Victoria Rages as Nick Exposes Ashland 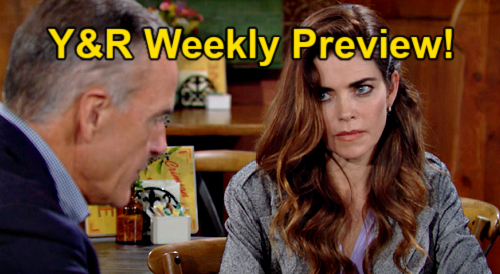 The Young and the Restless spoilers reveal that the preview for the week of September 27 shows Ashland Locke (Richard Burgi) visibly shaken. The media mogul’s facade begins to crumble when the truth is exposed. Victoria Newman (Amelia Heinle) confronts Ashland about his lies. Meanwhile, Billy Abbott (Jason Thompson) justifies his actions.

According to the information Phyllis found, Bobby died in a car crash four decades earlier.

Nick offers Ashland the chance to tell his side of the story, but he doesn’t come alone. Ashland and Victoria walk in together, which means Nick has no choice but to expose the “Locke-ness Monster.”

In the Y&R weekly preview, Victoria learns that Ashland has more secrets. Ashland promised that there was nothing more he was hiding.

Victoria was still willing to marry him despite not knowing his real name. Victoria confronts her finance and says she feels that he’s still hiding something.

All those doubts that Victoria has in the pit of her stomach won’t go away and there seems to be a good reason for that.

Later, Ashland tries to do damage control by saying he should have told Victoria the truth from the beginning.

The Young and the Restless spoilers reveal that Victoria looks betrayed and glances down at the table. Victoria says, “how could you do this?!”

While Victoria feels completely betrayed, her anger isn’t targeted at Ashland. Victoria feels betrayed by her own brother and doesn’t understand why so many people are interfering in her love life.

There is a chance that Victoria will switch gears later in the week though.

So while she blames Nick and defends Ashland in the beginning, that doesn’t mean the wedding is going to continue. Victoria could find out more information about Ashland that she simply can’t tolerate.

The Young and the Restless Spoilers: Billy Abbott’s Justification

In the preview clip, Billy has a conversation with Jack Abbott (Peter Bergman). Billy is justifying his actions and says that Victoria is marrying a man whose life is based on lies.

Billy fiercely declares that he’s not going to allow Victoria to marry a man who has been lying from the beginning.

Just how far will Billy go to stop the wedding and what drastic measures will Ashland take as his entire facade falls apart? We will have to keep watching the CBS soap to find out.

Will the truth come out? 🤔 Find out this week! #YR is all-new weekdays on @CBS. Watch the latest episodes on @paramountplus! pic.twitter.com/arR5M58xH1