The Young and the Restless Spoilers: Winners and Losers At Victoria & Ashland’s Wedding – See Who They Are 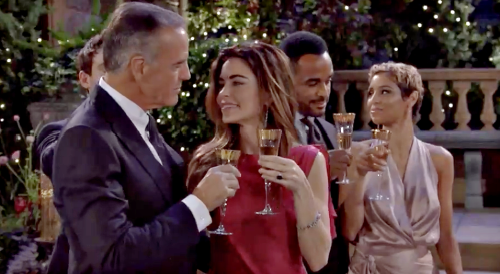 The Young and the Restless spoilers document that fans will need to count the winners and losers after the wedding show is over. Let us look ahead to see who comes out on top and will likely be on the bottom.

Victoria Newman (Amelia Heinle) will have defied the odds, some in her family, public opinion, and Billy Abbott (Jason Thompson) if she marries Ashland Locke (Richard Burgi), as Y&R spoilers project.

Victoria knows all about the so-called Lockeness Monster’s past, despite her brother and multiple-time ex-husband putting on a last-minute full-court press. Yes, Queen Victoria will reign as Vashland weds.

Ashland is more than a survivor. He will have beaten back his detractors, including the pesky and greedy Jesse Gaines (Jamison Jones).

Burgi’s character may be in failing health. But at least he will have married the woman who inspired him to live out his last days with optimism and zeal

Adam Newman (Mark Grossman) did not want to cause his oldest sister any grief. He likes Ashland, as well.

To Adam’s credit, Victoria said that her intended husband spoke well of him. So, for the moment, Adam is actually in a better place than Nick Newman (Joshua Morrow).

Sally Spectra’s (Courtney Hope) star is rising as well. She is teased as the unintended creator of the dress that Victoria wears on the big day.

The above accomplishment took creativity, guile, and persistence. Sally will make her mark. That should supercharge her professional clout and impress Adam.

Young and the Restless Spoilers – Victor Newman Sets The Stage

Kyle Abbott (Michael Mealor) and Summer Newman (Hunter King) were said to have had an intimate wedding ceremony in Milan, Italy. Some members of their families were there, including Harrison Locke (Kellen Enriquez).

But Skyle’s unseen nuptials, which were months in the making, do not compare to the mega event that Victor Newman’s (Eric Braeden) wealth enabled at his palazzo in Tuscany, Italy.

The fabulous setting was also set to beautiful music through the presence of one of Y&R’s original characters, Leslie Brooks (Janice Lynde, who is a pianist in real life).

After all these years, Y&R’s lead character is still Victor. Yes, he scored another victory.

Young and the Restless Spoilers – The Losers Earn Scorn

Nick alienated himself from Victoria by pushing too far. He should have taken his father’s advice in this instance. Now, he needs to re-establish trust with Heinle’s character.

Billy spent a lot of money, time, and energy. What did he get as a result? Not much, if anything. And his pawn, Jesse, has been pursuing a foolish quest for revenge.