BY Dorothy Gale on February 23, 2021 | Comments: Leave Comments
Related : Recap, Television, This Is It, THIS IS IT Premiere, This Is Us, TV 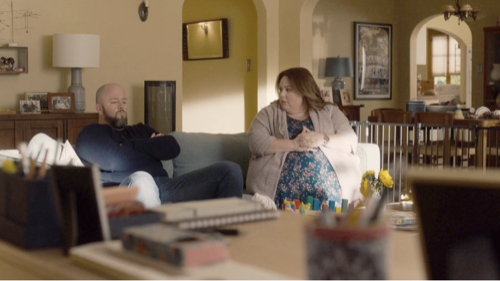 Tonight on NBC their honest & provocative dramedy series This Is Us with an all-new Tuesday, February 23, 2021, episode and we have you This Is Us recap below.  On tonight’s This Is Us season 5 episode 9 called, “The Ride,” as per the NBC synopsis, “A series of car rides propels the Pearsons towards new stages of their lives.”

In tonight’s episode of This Is Us we take a look back at Rebecca and Jack when they were about to go home with their children. Jack is packing things up and Rebecca is a bit spaced out, he tells her they can do this. Jack goes to the car to install the car seats, but he doesn’t have a manual. One of the security guards asks him if he wants help and Jack says no he is ok. Then we see Kevin doing the same thing, installing the car seat, but he has video instruction on his phone. A guy walks by and takes pics of him and Kevin loses it and tells him to give him a little dignity. Kevin apologizes, then tells the guy to get another photo. He goes back into the hospital and Madison tells him that they have been released.

Then we see Randall and Beth, they are going home with their daughter. Toby is outside the hospital on a park bench when Kate comes out of the hospital holding Hailey and he is holding a sign that says “Hi Haley, I’m Your Dad.” Toby holds her and says she is a keeper. He asks her where Ellie is and Kate says she is just signing the birth certificate and will be right out. Kate tells him that they should be extra sensitive with Ellie today. Ellie is brought out in a wheelchair, Kate grabs her bag. Ellie says everything is signed. Back to Jack, he is putting the kids in their car seats, then Kevin, then Randall.

Jack is driving home, he tells Rebecca that she is a warrior. Rebecca hates that she can’t see the kids, if there weren’t three of them she would be sitting back there. She asks him if Kate’s car seat is ok, maybe they should pull over. Then she says that Kevin’s head is flopped over to one side. Jack keeps telling her that everything is fine. All of a sudden, the three starts crying. A little different for Randall and Beth, they are also on the way home, but she is sitting in the back with the baby. Randall tells her they should get a new car, a family one in case they have a third.

Madison is also sitting in the back with the twins, Kevin is driving and he is tired. He says he is seeing things, he thinks they are being followed and it is paparazzi. Kate is in the back with Hailey, Ellie is sitting in the front with Toby. Kate asks about Ellie’s daughter Willow, she says they will go visit them in a couple of weeks. Kate says they will call her when they are all settled in. Ellie says she knows she said yes to adoption, but she just wants to say goodbye to Hailey and go home.

Jack is driving slow because of the babies in the car and a car behind them starts beeping the horn, and passes them recklessly, then cuts them off. Jack follows the guy into the gas station and is about to beat him up when Rebecca stops him and asks him what his problem is, they have three newborns in the car. Kevin is upset that the paparazzi is following him, he pulls over, and goes over to speak to the guy. Madison gets out of the car and tells Kevin to go back to the babies, she’s got this. She gets the guy to leave and then tells Kevin she is driving the rest of the way home.

Randall stops at DQ to get a Snickers Blizzard for Beth and he starts talking about having a third child when they are on their way home with the second. Beth tells him, now is no the time to discuss this.

Jack is putting the gas in and the babies are still crying, he goes in to pay and buys himself a small whiskey bottle and downs it right there. Jack asks Rebecca to drive, he says that way he can turn around and check the babies, she says ok. Toby gave Hailey a bottle, she is asleep, he goes to join Kate in the living room.

Kate asks him how is he not upset about this. They signed up for open adoption and now it has changed because Ellie wants to cut off with them. Toby tells her that adoption is a journey, Ellie might change her mind and they will always let her know that she is her mother. Randall is speaking to his daughter, outside the DQ, he tells her that the nurse said she has his eyes and that is special.

Jack and Rebecca arrive home, the babies are asleep. Jack gets out of the car, he looks in back and three are asleep. Rebecca says they should just sit there and wait, enjoy the quiet, never wake a sleeping baby. Toby is preparing formula in the kitchen and Kate is holding Hailey. Toby tells her that Ellie chooses them because she saw a funny, big-hearted mother for her child. And, Ellie may or may not be in the picture, but they will figure this out. Then he adds, that he was laid off from his job.

He kind of knew it was coming but he didn’t want to freak her out. She tells them that they will figure out the job stuff tomorrow, today they are going to be a family. Kevin fell asleep, he hears the babies crying and gets up. He goes into the room and he sees Jack holding the twins, he asks his dad how they managed. Jack says it was easy, all he ever wanted were the kids and mom. Jack tells him to stop trying to live up to him.

He tells Kevin to close his eyes. Kevin wakes up, he slept in the car. He goes into the house and the babies are in the house with Madison, she says she has everything under control. Kevin tells her that he wants to make this official, he really wants her to be his wife, he wants to be a family. He gives her his hospital bracelet until he gets a ring and asks her to marry him, she says yes.

Rebecca and Jack are still in the car, he says this is the quietest it is going to be in eighteen years. She says there was the person that went to the hospital, and there is the person she is now. She doesn’t even remember that girl from four days ago. She tells him that her mom lost a baby when she was five, she had a miscarriage. She thinks she was really sad for a long time. She asks jack, what if she can’t be a great mom. He says he worries about a lot of things, but never about that.

He tells her that at the gas station, he bought a bottle of whiskey and downed it right there, he was overwhelmed by everything. When the guy cut them off he saw red and lost control, just like his dad would. Every day when he was a kid, his father would come home at 5:15, he and his brother were as happy as clams before he would get home, once he was there all the happiness would be sucked out of the room. He would have a scotch in his hand before he would even say hello, he needed it, just to be around them.

We get glimpses into Jack being a dad. Then we see an older Randall, and the girls come over to visit.