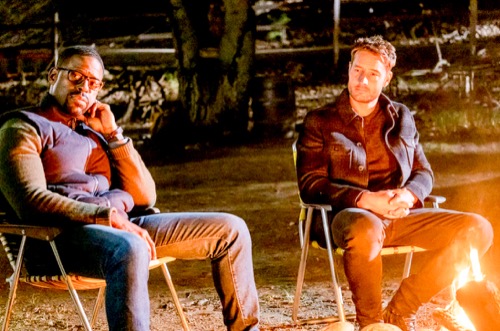 Tonight on NBC their honest & provocative dramedy series This Is Us with an all-new Tuesday, May 18, 2021, episode and we have you This Is Us recap below.  On tonight’s This Is Us season 5 episode 15 called, “Jerry 2.0,” as per the NBC synopsis, “ Kevin and Madison partake in their respective bachelor and bachelorette parties.”

In tonight’s This Is Us episode, Kevin and Randall, look to be in their twenties. Randall tells Kevin that he is happy to have him back east. Sophie tells him that he got back just in time for his wife Sophie’s summer break. Randall says he doesn’t know how they did it apart, Beth has an internship that summer and it is going to be hard.

Beth says she has decided if she is going to take it yet. Kevin tells them that it is super easy. Rebecca comes into the room and announces that they are leaving for the cabin before it gets dark, Kate says she can’t believe she is going to the cabin with all these couples, just smother her with a throw pillow. Randall tells Beth that she is going to love the cabin.

Present-day, Randall is dressed in fishing gear, Kevin got everyone fly fishing gear for the bachelor party. She says she is looking forward to the bachelorette getaway, after everything that has gone on with the dance studio.

Kate is putting things together for the bachelorette, she tells Toby to recharge and enjoy himself with the guys, he deserves it.

Rebecca is packing Miguel’s things for the trip, he tells Rebecca maybe he shouldn’t go. She tells him that she is fine, her meds are working and there is no further deterioration, she will be fine. He puts on his sunglasses and asks her if he looks cool, she says he looks like Erika Estrada’s character from Chips.

Nicky asks Kevin if he has room in his bag for his new jigsaw puzzle, Kevin says he is not bringing that to his party. Kevin gets a call from Sophie, she says she saw his magazine cover about his engagement and his twins and she wanted to say congratulations, his fiancé is beautiful and his life is all amazing, she is happy for him.

At the cabin, Kevin tells Randall and Beth again that the long-distance thing is no big deal. Sophie gets upset, she says it is a big deal, at least for her. Kevin says he is there for now, but he may be traveling, his agent says if he wants to take acting seriously he has to. Sophie gets upset and walks out of the room.

Randall meets Miguel, Kevin, Miguel, and Nicky outside, they all arrive for the bachelor party. Randall tells Kevin he did, last Thanksgiving he said he wanted to be married with kids before he turned forty, it’s out of order, but he is doing it. The sky opens up and it starts to rain.

At Kate’s house, Madison arrives for her bachelorette party. Beth and Rebecca are there, and the doorbell rings. A model arrives, his name is Joe, the idea is that he is going to strip down and they are going to paint him, Joe knows Madison.

Joe poses, everyone is painting. Kate turns to Madison and tells her if it is too weird she can end this, Madison says no, the best revenge is to paint the man who ghosted you the day before you marry People’s most beautiful. Rebecca asks what ghosted means when Madison explains it, Rebecca calls him horrible.

At the cabin, the men are watching a movie together and Nicky tells Kevin that he is like Jerry McGuire 2.0. Kevin replies that he is marrying Madison because he is crazy about her, not because they had the kids together.

We see Kevin’s reaction to the Jerry McGuire movie when he was younger and he was excited.

Toby liked the movie, Kevin asks Nicky why he would say that he is marrying Madison just to do the right thing. Kevin says it is rude and mean, and calls him a jackass, Randall tells Kevin to go take a breath.

At the bachelor party, Rebecca finds Beth in the bedroom, she is looking at her texts for possible jobs. Rebecca tells her that she is incredible, and if these traditional dance academies are broken, she should go change them and do what she always does, blow them away.

Kevin comes downstairs and reads Sophie his ultimate dream about him and her to the very end.

Randall finds Kevin in one of the bedrooms, he tells him that Nicky has a fire going on outside. Kevin is reading his old Jerry McGuire mission statement that he wrote for Sophie. He tells Randall that Sophie called him to congratulate him. He asks Randall how does someone ever really knows who they are meant to marry. Randall tells him to come with him. They go outside and sit beside the fire. Randall tells everyone they are going to have a real talk, Nicky says it is the lamest bachelor party.

Toby says that after watching Jerry McGuire, he thinks they are never going to make it. Toby apologizes, he says he is in a weird place, he really needs a new job. He needs it financially and for his mental well-being. Randall tells him that he is going to be ok and they are both going to weather the storm. Nicky says the movie put him in a bad mood, anything with romance, he can’t relate to them. He had one relationship, fifty years ago, Sally Brooks and he blew it. There are no second chances, there are no happy endings.

He thinks that is why he said the things he did to Kevin, he was pissed off about his own crappy love life. Kevin says would he and Madison have ended up together without the kids, he doesn’t know. Miguel says he loves the expression, written in the stars, he thought that is how it was for Rebecca and Jack. He knew it wasn’t like that for him and her and he was filled with doubt on his wedding day. The years went by and he realized, it’s ok, yes some love stories are written in the stars and some are just written together. Miguel thinks Jerry and Dorothy make it.

Rebecca and Beth leave the bachelorette party, Beth thanks her for earlier, she really needed to hear it. Madison is still inside with Kate who asks her if she is happy, is Kevin everything she deserves. She says she didn’t know what to think, but she loves him, she really does.

Miguel calls Rebecca, she tells him that she just got home safe and sound. He tells her that he is sorry if he drives her crazy with all his worry.

Nicky is alone in the living room, he searches for Sally Brooks.

Toby calls back a job and says he would love to be considered for the San Francisco position.

Kevin has his phone in his hand, he deletes Sophie’s contact information.