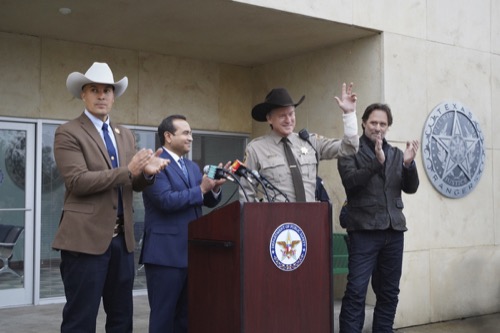 Tonight on the CW their reboot of the long-running series “Walker, Texas Ranger,” WALKER air with an all-new Thursday, February 11, 2021 episode and we have your WALKER recap below! On tonight’s WALKER season 1 episode 4, “Micki is uncomfortable with the spotlight Capt.

James puts on her during a current investigation; Walker talks to Liam about their parents and learns there was trouble while he was away; Trey applies for a new job in town.”

Micki and Walker find themselves in a high-speed chase. The truck they are chasing crashes. They discover the man Enzo behind the wheel is a gang member. The next day, Micki is recognized for the arrest. Enzo’s daughters tell her she has it wrong.

That night, Walker and Micki attend a retirement party. They talk about the gang and their colleagues. Walker thinks Micki can handle herself just fine. The next day, Walker and the kids move their things to the cabin. August steals a phone from one of the moving boxes. Stella overhears Liam and her dad talking about Bel’s family’s case with ICE.

Micki cannot get over Enzo and his daughter. She starts to look into Enzo’s past. Meanwhile, Walker finds some letters from Gary to his mom in the cellar. He hides them.

At work, Micki tells Walker that Enzo’s gang activity fizzled out in the 90s. She wants to look into it off the books. Walker agrees. He has a lot on his mind. A colleague comes to tell them Enzo has passed.

Stella heads to tell Bel what she heard. Micki and Walker head to look into Enzo’s past. They talk to the family Enzo worked for who also lost their father in the incident. The spoiled children didn’t like Enzo and their wife isn’t too fond either. All three are even more upset when the will is read and their father’s ], Bob, the estate is to go to Enzo. It is up to Micki and Walker to determine if Enzo killed Bob. If so, they would get the estate.

August has a friend show him how to develop photos from the phone and a camera he found. He gets really upset when the pictures are of Walker and another woman.

Stella and Liam meet with Bella and her parents. They could be deported but Bella won’t be since she was born in the US. Micki finds photos and runs them to Walker. She thinks Enzo may have been Bob’s son. They head to talk to Bob’s wife. She denies Enzo could be Bob’s son. She also doesn’t ask about the autopsy.

Stella heads to community service. Working at a stable, a horse gets loose. She goes after it with a boy she likes. They get the horse and head back. She hides when she sees Walker asking around about her. Meanwhile, August finds the woman from the pics in his dad’s old phone and texts her.

Micki and Walker discover Bob’s wife was having an affair and with the sheriff! They head to see the sheriff. Micki catches a ride with him while Walker follows. Micki gets him to confess that he killed Enzo. The sheriff shoots at Micki, missing her head.

That night, the captain congratulates Micki. Walker and Micki hang and eat BBQ. She thanks him for the support. He trusts her.

Stella talks to Bella. She thinks it is her fault ICE is after them. Bella tells her it isn’t. They are good. Stella is happy. Meanwhile, Walker talks to his mom about the letters. She politely tells him to mind his business. August was also asking her question but it was about Walker.

Micki comes home to Trey. He has a new job and it is in the civilian world. She is thrilled. August confronts Walker about the photo. He shares that he was undercover. They talk about whether he is happy. Walker says he is.

The next morning, Walker finds August sleeping in his room with his old phone. The woman August texted has texted back. Walker looks stressed and confused.