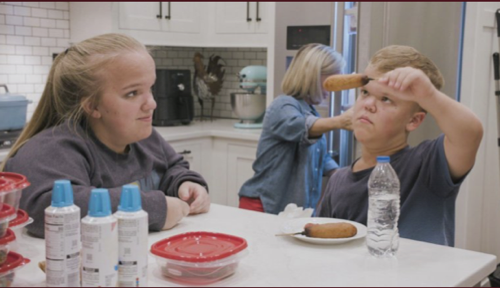 Tonight on TLC America’s largest know little family, 7 Little Johnstons returns with an all-new Tuesday, March 22, 2022, episode and we have your 7 Little Johnstons recap below. On tonight’s 7 Little Johnstons Season 11 Episode 2 “Friday Night Heights,” as per the TLC synopsis, “The Johnstons introduce Joose to American traditions, including pumpkin carving at Halloween and a Friday night at the high school football game. Meanwhile, Alex is struggling in school.”

In tonight’s 7 Little Johnstons episode, tonight’s episode begins with the family carving pumpkins with Joose, he is the foreign exchange student that the family has taken in and he has been there for a few days. This is the first time that Joose is carving pumpkins, it is not popular in Finland. Having Joose there is an excuse for everyone to get in the holiday spirit.

The kids are older and won’t dress up, but at least they are doing activities with him. In Finland, some people celebrate Halloween, but it is not that popular. Out of all the pumpkin, Anna’s is the best. Jonah says that he loves having Joose around. Emma loves to learn new things from Joose. They are introducing Joose to Mediteranian takeout food. Trent says Joose feels like family already.

Alex ha a stressful day in English class, when Amber mentions it, he leaves the table crying. Joose says the foods are strange, he likes some but he doesn’t like the fatty or unhealthy foods. Anna tells him that he eats more healthy than them. But he likes ice cream, French fries, sushi and stuffed peppers. Amber says it is pretty obvious that the are all bigger than Joose. Alex gets excused from the table and says under his breath, thank God. Trent tells him to lose the attitude when smashes the trash can.

Amber tells Trent that since the kids didn’t dress up for Halloween, they should and she does as a punk rocker. He says he is a good sport and comes into character a lot of time in the bedroom. They talk about the kids, she says it has been a tough week for Alex, there are a couple of classes that he is having a hard time with, the way the teachers teach. He is in a lot of honor classes, he is not used to working really hard, and it is also a new schedule. He has high standards of making high grads and he hasn’t in two classes. He doesn’t see it gtting better so he is worried even more.

Anna is talking to Emma about the dog costumes, there is a contest and she wants to enter he dogs because nobody is getting dressed up for Halloween. The girls set up a runway of sorts, but Elizabeth doesn’t think the dogs are going to cooperate. They put the dogs in different costumes and wants the family to decide which one the dogs should wear for the contest. Ld man and the baby costume is getting a thumbs up from everyone!

The family come up with a catchy name for the dogs to enter the contest, Baby Boomer.

Amber goes to see Alex and asks about his classes, he says fine. He is feeling better, he knows that he put too much pressure on himself and needs to chill.

Amber ordered some Finish food for Joose from home. She puts it all on the counter and show him, he is so excited. One is salty black licorice, in fact a lot of the stuff has black licorice in it, it is very popular in Finland. Next is reindeer jerky, the flavor is ok, but you can’t chew it so you can swallow it. Reindeer is a very popular food as well.

They try a type of mustard and Emma is almost sick. Vodka filled chocolates are a surprise, Emma says it tastes like rubbing alcohol. Joose says it tastes like hand sanitizer. After they tried all the Finish snacks, Elizabeth bought American snacks. They start with cheese in a can, Joose says it is horrible. But Joose likes pop rocks, he says they are funny and weird. The last thing is corndogs. Joose inspects it and tries it, he says it is bad. An d Alex is like, give me that corn dog.

The family is at a football game and Alex is in the broadcast seats, it is pretty high up and he is happy that he is conquering his fear of heights. He is filming the game for school. Elizabeth and Brice are also at the game, they have been dating now for two and a half years. Joose got try peanuts for the first time, but he put it in his mouth with the shell on. Joose says peanuts are not for him. And he thinks the game is crazy. The filming went great for Alex, he is pleased.

Time for the Halloween dog costume contest at the dog park. The dogs have their outfits on and are ready to win. In Finland there are not many dogs, and there are more dogs than people at this contest. Joose has a white poodle, nine years old and his name is Willy. Their dogs make it in the top five. They get second place, they find it cool and rewarding. They win some dog treats for the dogs.