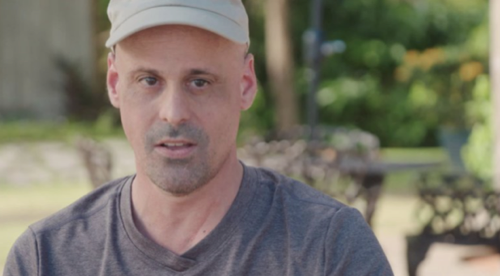 In tonight’s 90 Day Fiance episode, Usman is such a user. He toys with people. He was doing so with Kim and that’s why he agreed to sleep in her bed. He must have noticed she was pulling away. She was done with his standoffish behavior as well as the fact that he could barely bring himself to touch her and so he gave her an incentive to stay. He gave her just a little enough to make her believe there was a possible future for them. But Usman still doesn’t see himself in a relationship with her. He doesn’t kiss her. He doesn’t wish to be intimate and the most he says about her to his friends is that he was willing to repay the loyalty she’s shown him. He doesn’t say the “L” word. He doesn’t even claim he could be falling in love with her and so all he does do is give her crumbs. And she falls for it.

Usman may be using Kim, but she’s the one allowing it by not seeing through him and its only going to get worse if she doesn’t stop it. There’s no way a man attracted to a person would agree to share a bed with that person and not even try to hold their hand. Like he doesn’t want to do that. He doesn’t want to give her anything and that bed stunt was just a stunt. Its wasn’t a sign of him wanting more with her. It wasn’t a sign of him being ready to commit. Usman talks a big game about how it wasn’t in his culture and he ignores the fact he slept with his ex-wife literally that first night they met in person.

The cameraman asked him about it. They remembered Usman’s past and he said he only did so because he had already made a commitment to his ex-wife. He had already proposed to her by then. He also went on to say how he wasn’t deep in it with Kim as he was with Lisa. Usman had this woman fly halfway around the world to meet him and he doesn’t think that’s commitment. He still thinks of her as a friend. A friend who buys him things. He needs her around to keep getting stuff and that includes attention he was now getting from the show for appearing again with another poor sap American. And so Kim should have seen this coming, but she hasn’t.

Over in Peru, Ben finally arrived. He got on a plane in spite of Mahogany telling him she changed her mind about him coming and that her father has expressed doubts about the relationship. This wasn’t the first time that she cancelled him. He was scheduled to come out to Peru once before. Mahogany cancelled on him then too because she claimed her parents were going out for a week and that she didn’t see the point of him flying down if it wasn’t to meet her parents. Ben cancelled his flight last time because of Mahogany’s misgivings. Only he didn’t do that this time. He flew down to Peru and he messaged her he was coming. And he hasn’t heard from her since.

Mahogany wasn’t answering her phone. She also wasn’t there later on when he landed and so it was beginning to look like his circle was right when they said he was being catfished. Ben was practically in tears as he was realizing this as well. But Ben recover from being catfished. Mike can’t if Ximena calls things off. Ximena told Mike that he needed to change things about his hygiene if he wants their relationship to work and, seeing as this was his first ever adult relationship, he should have just said “sure” and kept it moving. He instead brought up his ADHD. He said he couldn’t remember to be clean because of his condition and Ximena said something about loving him as he is. And he was so grateful that they didn’t have a bigger conversation about where this relationship is going.

Ximena and Mike left the resort. They returned to her house. Mike tried to show how much he’s changed by putting in more of an effort around the place and he even started to cook. He wanted to show that he could take care of her. He sorta failed. The first time he cooked a meal it was spaghetti and it was undercooked. Though She still told him it was good. She also warned her kids not to eat it because it would poison them and so Mike cleaning up realized that they didn’t really touch their food, but he didn’t say anything because he didn’t think it was a big deal. He was more concerned about her father and what her father wanted to tell him than he was about his cooking.

Ximena’s father wanted to speak to Mike alone. The father was concerned because Ximena’s past choices in boyfriends have all been bad for her and she was currently a single mother of two. The man just wanted to know if Mike will be different. Mike swore that he would be. He said he loves Ximena. He wants to take care of her. He also told her father that he wants to marry her. He even asked the guy for his blessing and he got it and so he’s shown he’s serious. He wants to give Ximena the world. But Mike if often child-like in this relationship. His last “serious” relationship was when he was fourteen. And so Mike doesn’t know what he’s doing.

Something that Ximena exploits. She’s not really attracted to him. She found several things wrong with him that she was willing break up over and it looks like she just came with one foot out the door. Mind you, this is the same woman who thought having a baby with someone in prison was a good idea. She also got involved with a hitman known as sicario down there. She broke things off with that guy and he instantly threatened to kill her. Ximena had to go to the police for protection. Ximena also said in an interview way back that Mike isn’t her type because he was a little too stable for her. And so this woman wasn’t someone that Mike should marry. He should marry someone who loves him back.

Meanwhile Jasmine and Gino were enjoying themselves in Panama. They went away to a special resort for lovers and Jasmine loved it so much there that she apologized for her earlier behavior. She knows she was acting irrational. As well as jealous. Jasmine has been so hurt in her past marriage that she often lashed out at Gino and so she finally apologized for her ways. She doesn’t want to lose him. He’s a great guy. Or so she thought at the time. She apologized and she even cried happy tears because she said she’s never been so happy in her life. And so right about then is when Gino should have mentioned his secret.

Gino should have said he was still in contact with his ex. He chose to instead to hide it even after Jasmine told him to cut off all contact with his exes and so Gino thought he was saving himself from a fight, but he was creating much bigger problems than mere contact with an undesirable. Gino has said or done something so bad that his ex contacted Jasmine. She wanted to tell Jasmine something. Jasmine ignored her at first. She blocked her and it wasn’t until a confrontation with Gino that she unblocked this woman and that’s where everything came out. And so Gino should have just been honest from the start because if he had then he might have been able to keep Jasmine.

Alina’s secret was also playing havoc in her relationship with Caleb. Caleb didn’t want to commit to her after he found out she was still living with her ex-boyfriend while they were talking and that she stayed with the guy for several weeks after. Alina at one point was genuinely afraid she would lose him because of this secret. Caleb had needed time to think and after some pushing from Alina’s friends but he eventually came to the conclusion that what he was building with her was too important to let her secret destroy.

Ben, even faced with the evidence of this catfish, still refused to believe it. He said there was a three percent chance of Mahogany not being who she said she is and so he was still hung up on their “love”. It didn’t matter that he tried to send flowers to her address. The delivery person said the flowers couldn’t be delivered and so he had to give it to a neighbor. It didn’t matter that they’ve never video-chat. It didn’t matter that Mahogany was so much younger than him. Ben was in love and he didn’t want to believe she couldn’t be real. Everyone said so. He just didn’t want everyone to be right. And so the last thing he said to the cameras was that he couldn’t wait to meet her soon.

Then there was Kim. Kim also pushed for sex and so Usman stormed out of her room because he said he didn’t move into her room for that. She had to chase after him. She also had to apologize just so that he wouldn’t get his bags and leave. Usman returned to the room. He tried going straight to sleep. Kim wanted to talk and she brought up her son. Kim’s son is very important to her. She didn’t think her son would approve of the way Usman is treating her and he lashed out at the idea because he feels that as his junior her son needs to respect him. Its that way where he comes from. He expects to be treated as the elder and Kim said that’s not how it works where she comes from.

Kim said her son was a big factor in her life. He was her baby. He’s had to watch her get her heart broken several times in the past and he doesn’t want that to happen again. But Usman didn’t want to hear it. He wants to be able to use her without having to worry about the other people that will be affected.

Jasmine meanwhile found out that Gino sent his ex-wife naked photos of Jasmine.