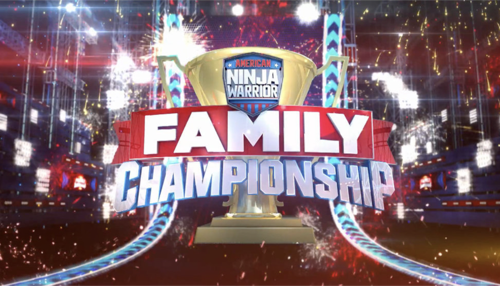 Things were different tonight. Rather than show Stage 2, the show decided to mix it up and instead had a competition between the ninjas and their families. It was Labor Day in America. The show wanted to celebrate it and so they came up with some family fun. It was a great way to celebrate the holiday. It also made people laugh. There can never be too much laughter in the world. The ninjas were ninjas. Their families are not so much. It was funny watching them all try at tonight’s obstacle course. Up first was the Lewis family. They were the first to run the course in a relay style that was also new for tonight.

Derrick was the dad. He was a former football player. He was also a family man. he came with his wife Noelle and with one of their sons, Darius. Derrick and Noelle were the parents of eight kids. They have six sons and two daughters. But Darius was following in his father’s footsteps in football. He was already a part of his team in school. He ran the course with his parents. He did his part well. His mother however got tripped up on the balance obstacle and was the first to fall into the water. Only her husband was still allowed to make his run. He went on to fall as well and so they only got points from Darius’s run.

The Weber family went next. Ian was the veteran ninja. His wife, Carissa wasn’t. She wasn’t one and neither was their nephew, Kaleb. Ian chose the two out of his incredibly large family. He has nine siblings as well as over fifty nieces and nephews. He could have chosen anyone but he decided to go with Kaleb and Carissa. Kaleb and Carissa made their first run tonight. They went after Ian who did well on his part. Carissa, not so much. She fell on the balance obstacle. Kaleb was still able to make his run and he showed he takes after his uncle. He was a ninja now. He proved it by hitting the first buzzer of the night.

The Choi family went next. Jimmy Choi was a veteran ninja. He was known for raising money for Parkinson’s. He actually has the disorder and that’s never stopped him from doing great on the course. Only this was his last year. Jimmy announced he was retiring from ANW. He’s been battling Parkinson’s for eighteen years and he just wanted to be with his family right now. Michael J. Fox did a video in which he encouraged Jimmy. He wished him luck and the fact that Jimmy gets to do this run with his family meant all the world to him. Jimmy was running with his daughter and cousin. His daughter Karina was the youngest on the course.

His cousin’s name is Minkay. She was the first to run the relay and unfortunately, she fell. She was new to this. The same also went for Karina who also fell. It was just Jimmy who did well. Jimmy made it to the Warped Wall and he hit the buzzer for the first time in his ninja career. It’s what he’s been trying to do all these years. It meant the world to him. He also got to do so with his family there and so Jimmy hit that buzzer a second time just for fun. As for who went next, that was the Heinrichs family. Shawn was the veteran ninja. He was making his run tonight with his two teenage daughters, Annabella and Secorra.

Secorra was the youngest of two. She does train with her father and so does Annabella for the matter. They train with him because Shawn frequently has to travel for work. He was a photographer. He takes nature shots for magazines as well as documentaries. He was also a rookie. He did ninja in his off time. This was his first-course run and yet he killed it along with his daughters. Secorra was able to hold her own in spite of being just fourteen. Shawn then did his run and he was awesome as well. Then came time for Annabella. Annabella made it all the way to the Warped Wall and became the third finisher of the night. There was also the family first to gain all six points from their relay run and so they were leading in the first place.

Next up was Team Beckstrand. All three members have competed on ANW. Kai was the son, Brian was the father, and Holly was the mom. They’ve all been on different seasons and they were all ninja veterans. They also trained together. They train as a family and it showed. Holly went first. She was amazing. She was followed by her son Kai who did really well. Then Brian came in and he brought it all home by hitting that buzzer. They were finishers. They also were the second to get the full six points. Depending on time, they could knock the Heinrichs out of first place. And so there was just no telling who was (at this point in the competition) in first place after the Beckstrands had their run.

The O’Dells went next. The dad was George, Amanda was the ninja veteran as the mom, and their son Trey. Amanda was known as the “Lunch Lady Ninja” because she was representing cafeteria workers. She did great back in her rookie years. She went on to do great tonight. Her husband ended up falling on the balance obstacle. But so many have fallen there that it was okay. Then their son had his run and he went on to hit a buzzer on the Warped Wall. They became finishers. They walked away with four points and they were just happy to have done this as a family. And up next was the Zimmerman family.

Sandy Zimmerman was known as the first mom to ever hit a buzzer. She came back for the family with her husband, Charlie, and their son, Brett. They’ve all competed on ANW. Charlie competed back in season ten. But his family didn’t think he did all that well because they had him try out to compete with them as a family. He ended up passing and so he got to come with them. The son was also a ninja. Brett was on ANW Juniors. The two that haven’t really been on ANW did really well tonight. It was shockingly Sandy that fell. Sandy was on the last leg of the journey when her hands slipped. She fell and her family walked away with four points.

His wife, Hannah does the day camps. She was part of the team tonight and the last member was Josh. Josh has been ANW Juniors twice. He made it into the Semifinals both times. Josh was the ninja veteran. Only the family has been around the ninja gym so many times that they thought it would give them a lead tonight. The young men did well. Caleb had his run first. He did wonderfully and he got them two points. Hannah fell on her second obstacle and so she still got one point. Then Josh brought it home by hitting that buzzer. And all in all, they did amazingly well on an adult course when some of all of them have never been on one.

The Heinrichs went next. Now, they had a memorable first run. They gained six points and showed how great all of them could be. Even little Secorra. Secorra was the second youngest person on the course. She did well in the first round and she fell during the second round. Her sister did well. Her dad also fell. He fell on his second obstacle and so they still got an additional point. This plus what Annabella did has them in the lead with nine points in full. Then came the Zimmermans. The Zimmermans did much better in the second round than they did in the first. This time Sandy didn’t fall. She held on and her son Brett hit that buzzer.

The Zimmermans did so well that they were in the lead with a full ten points. They were in the lead for the Power Tower. Next up was the Beckstrands. They got six points and had a perfect run during Round One. Sadly, the mom fell during Round Two. Brian and Kai still got points and they were evenly matched with the Zimmermans at ten points. The Choi family went next. They needed a perfect run in order to stay in the competition. Jimmy was the only one who got the full two points during the first round. He again gained points during the second round. His family on the other hand didn’t hold up as well. His cousin and his daughter both got one point.

It wasn’t enough to keep them in the competition. But Jimmy had an incredible run. It was a great way to retire from the sport.

And in the end, the family that walked with the first ever ANW Family Championship was the Auers!