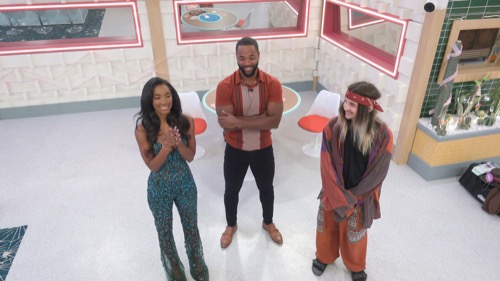 Tonight’s episode begins with the live season finale of Big Brother, 82 days of power shifts, blindsided, and game-changing twists. Tonight it is every houseguest for themselves.

Part one of the HOH competition was grueling, houseguests had to hold on to a giant wiener. Everything is on the line for Taylor, she wants to be in control. This is really a tough endurance competition. All three are determined to hang on, but it is really crazy getting thrashed around. Taylor is down, she really wanted to secure her part in the finale. Turner says the worst part is the spinning. Monte falls off and Turner is stoked, he wins the first part of the final HOH.

Time for part 2 of the final HOH, Taylor gets to battle it out with Monte. BB’s advertising dollars have been going to BB billboards and it is up to the players to ensure they are correct. They have to collect festival titles and remember if they were an HOH or Veto competition and place them in the right order of which weeks they were played in.

They have to be careful, there are some bootleg titles that are not correct. The houseguest who does it correctly in the shortest amount of time wins. Taylor is thrilled, this is what she has been studying. She starts with the Veto billboard because she knows them well. She feels really good about her time, she studied hard, and she only hopes that she can beat Monte.

Monte is doing really well, but then he realizes that he made a mistake, fixes it, and moves on quickly. He feels good and is flying through the competition. He just hopes that a small mess-up doesn’t cause him not to win.

Turner is going to give Turner and Taylor their scores. Taylor 7:04, Monte 6:41. Monte won the second part of the final HOH, he is so excited and now gets to face Turner in the third part.

Turner is thrilled, he is sure that he and Monte have this game in the bag because are taking each other to the end. But, he is still going to gun for the win in the third round because it will look good on his resume.

Taylor is devastated, she feels like she let all of the women of Big Brother down, the only way she can make it to the final two is if someone brings her, then she will have to craft a really good argument on why she should win.

Turner is confident, he thinks he can win Big Brother over Taylor or Monte, this is a win, win for him.

Monte is in a hard position, both Taylor and Turner think he is going to take them to the final two if he wins the final HOH, he says it is a tough decision and he has no idea what he is going to do at this point.

Dr. Will sits down with the jury to talk about the final three. They say Turner should win because he has a good social today. Michael reminds them that Monte made the move to get rid of him on Turner’s HOH. Terrance thinks Turner is smarter than he is coming off. Joseph says there is a strategy behind Taylor’s move, Turner is attaching to everyone. Taylor’s biggest move is that she was on the block five times and navigated to get off every time.

Michael says Taylor didn’t do anything when people attacked, she was poised and kind. Taylor managed to get them to do dirty work for her. Michael says they let Monte slide by. Indy thinks Monte had a good social game. Brittany says Monte is overly confident to win this game and getting sloppy socially. Terrance says he couldn’t connect with Monte, he was like a politician.

Time for the final HOH competition of the season, Monte and Turner are the only ones eligible to complete. This competition is called Jury Fest and the member of the jury was having such a good time that they decided to get jobs at this festival. Monte and Turner’s job is to prove just how well they know their former housemates who now sit on the jury.

They are about to watch some short videos That will feature a specific member of the jury, and each video will reference three statements about that specific juror, their job is to figure out which statement is false, A, B, or C. The houseguest with the most points after eight videos will become the final HOH of the season. After five videos it is a tie, but on the sixth one, Monte gets the lead. In the seventh video, they both got it wrong. It comes down to the eighth video and Mont got it right, and he wins. Monte is the final HOH. Taylor is thrilled, she still believes that the is going to take her with him.

Turner tells Monte they have been in a final since the beginning, loyalty over royalty. If he is not taken, he will be bamboozled. Taylor tells Monte that it would mean the world to her for him to take her with him.

Monte has guaranteed at least second place and the $75k prize that comes with it. This could be a $750k decision. Monte goes to the head of the living and votes to evict, Turner, he says the jury is going to be impressed that he made a big move.

Monte hugs Taylor and says he told her he would get it done, he did it.

Turner tells Julie that he is not surprised, it is not like he wasn’t expecting this. He says he regrets not having better jury management, and not evicting Michael because he didn’t make it anyway. And, the muffin saga lives on.

The jury has some questions for Monte and Taylor. Kyle asks Monte what was his most pivotal move. Monte says evicting Turner, he feels like it was a necessary evil at this point in the game. Michael asks Taylor if she was a big target the first few weeks, and how did she adapt. Taylor says she adapted because she was painted as a villain, she developed strong connections and she wanted them to know that she was not manipulating anyone. She played the game that she always wanted to. Joseph asks Monte what was his biggest blunder.

Monte says when he didn’t stay true to himself and protect Michael and Brittany, he wished he had handled it differently. Jasmine asks Taylor what big move did she make. Taylor says when it comes to big moves, she wanted to make sure she didn’t want to make the biggest move ever. She was a team player, but she didn’t want to be in charge. She came here to play a game for women, she tried her best. Brittany asks Monte, where did he take a deliberate risk. He says he assumed the risk of not letting Nicole and Daniel use their Veto and it made him become a target. Indy asks Taylor, she was on the block many times this season, was this a weak thing? Taylor says she was able to build relationships, she had a strong social game because she was not evicted. She is resilient and nothing was stopping her from staying in the game. Turner asks Monte, why he thinks he should get his vote when he broke their long-time alliance. Monte says their final two were formed after he had a final four with Taylor.

Monte and Taylor have their last chance to pitch to the jury on why they should win the $750k. Monte goes over all of his wins, getting rid of Michael and Turner. Taylor says she is more than the wins that she had. She sat on the block six times, bandaged herself up, and continued to fight like all other women in the world. She has been falsely accused in this game, and there was an all-white alliance attempted and she had to sit on the block with the person who did it. She is not a victim, she is a victor. One word to describe the whole season is resiliency. She challenges them to decide to choose that resiliency and she promises they will not do it in vain if they make her the winner.

Time for the jury to vote, Indy is up first.

Julie reveals that a lot of the houseguests lied about their occupations, Michael is a criminal defense attorney. Michael wasn’t the other attorney in the house, Joseph gets up and reveals he is also a lawyer. Turner says that is bussing. Julie speaks to Ameerah, she says she was most surprised about the Monte and Taylor showmance. Taylor says things are very early, Monte is a good friend. He agrees and pleads with the fifth. Julie asks Alyssa where she stands with Kyle, Alyssa says she is very hopeful, and Kyle says he loves her and hopes it works out. Julie asks Pooch how it feels to have pooched himself. He says he was gone so long he wasn’t sure he would be invited back. He says he didn’t make good decisions, but he is happy about the experience. Julie asks who ate Jasmine’s muffin, Turner gets up and says he did it.

Daniel is put on the hot seat, he is a superfan of the game and says he was sad when Michael got evicted.

Time to find out who won Big Brother, after 82 days. Julie is about to reveal the jury votes. They need at least five votes to win.

Taylor is the winner of Big Brother.

There is another prize up for grabs, the winner will receive $50k plus a cruise aboard the Princess Cruiselines. The top three vote-getters were Michael, Taylor, and Kyle. The winner of America’s Favorite Player, the winner is Taylor. She made history by winning both.

Taylor says she is going shopping and buying some potato chips. Monte says he is feeling great.