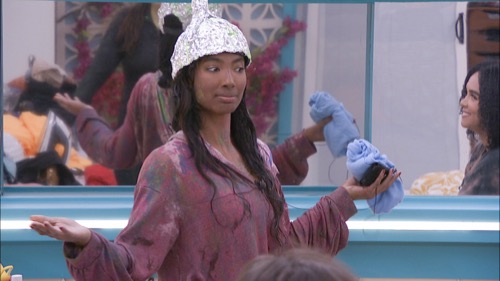 Tonight’s Big Brother episode begins with the end of the Veto ceremony and Taylor nominating Indy and Terrance for eviction. Ultimately, her target is Terrance. Indy is not surprised about the elimination, she knows Taylor’s target is not her, but she is still nervous. Terrance has been on the block four times now, the only thing that is easier, you get to know how to pack faster.

Taylor tells Terrance to win the Veto, take himself out and she will put Monte up – of course she is lying to him. Meanwhile, Terrance doesn’t believe it, he thinks Taylor is working with Monte. Taylor is also lying to Indy, she tells her that she is not letting a girl go to jury first on her HOH.

Meanwhile, Joseph and Kyle got pulled into a fake alliance with Indy, Jasmine and Alyssa called the Five Swatters. So, Joseph and Kyle take the information back to their real alliance, the Leftovers.

Terrance wants the Veto used by whomever wins it because he wants to see Taylor’s cards, who she would actually put up as a replacement nominee, and he tells Joseph who runs to Taylor.

Joseph tells Taylor that If the Veto is used, he would volunteer to go up on the block beside a target. She loves it, this will hide that they are working together.

Michael thinks Joseph’s plan is messy and doesn’t benefit the Leftovers, and going up as a pawn never works out, just ask Pooch and Nicole.

The Leftovers meet in the HOH room, Monte says Indy has to go. Turner also thinks she has to go because Terrance can’t win a comp. Taylor thinks they are making a pretty good point, if Indy leaves it will get the Leftovers closer to a final seven. Kyle is excited, Indy is the new target and he has no allegiance there.

Time for the Veto competition and it is called Punkaroo. This is 100% Turner’s jam. Today they will be headlining this banger of a punk festival by rocking out on the world’s biggest guitar. There will be a series of rounds and in each one they will bounce a ball down the neck of the guitar. They will either lose or gain points when they land in the scoring zones. The total score will be at the end of all rounds. The players with the lowest score in each round will be eliminated. Once they are eliminated, they will be able to smash a guitar and claim the prize inside. The players who are eliminated after, can take their prize or switch with a previously eliminated player.

Alyssa is now hoping that taking the trip from Taylor wasn’t a big mistake.

In the diary room, the discussion is Alyssa and her deadly move against the HOH, she took the trip to London and gave Taylor a punishment. Monte says they don’t even have to do anything, the other HGs do thinks that just present situations to get rid of them.

Even Kyle is frustrated and calls what Alyssa did a dumb move.