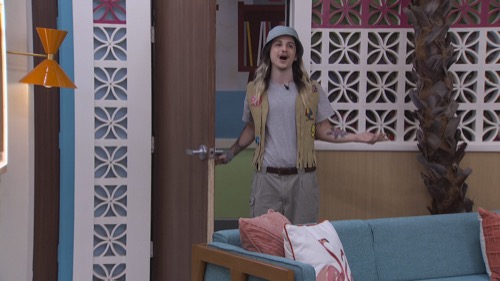 Tonight’s Big Brother episode begins with Julie saying that tonight everything could change as a surprising revelation force the houseguests to take a hard look at the game and themselves.

It’s 58 in the Big Brother house and now that Michael and Brittany have revealed past conversations with Kyle, anything could happen.

Kyle confronts Brittany and he wants to know what she said to everyone about what he said about an alliance. She says that he eluded to the fact that he wanted to form an all-white alliance. He says he is not racist and he wishes she would have gone to him first. But she did, and we see and replay it. He asks her if she thinks he is a racist and she says no. She thinks he probably said something that he doesn’t realize how they came across.

Next, Kyle speaks to Terrance and Monte, he says he is sorry. Monte says it is tough because they walked into the house together and don’t understand his thought process, which was obviously based on race. Terrance says he feels like he was playing, he tells Kyle it should have been that left and not Joseph. Terrance hopes Kyle uses this to learn more about life. Kyle says he made a huge mistake and he needs to look at why that was a thought or even a concept in his mind.

Terrance and Monte tell Turner about their conversation with Kyle. Monte says he can’t wrap his head around why Michael and Brittany waited until now to speak out.

Turner wants to call a house meeting and speak openly with everyone. Michael says during his HOH on week 5 Kyle outlined where he saw the division in the game. Kyle interjects and says why he thought there was a Cookout 2.0 brewing in the house, he blames it on never going to a bar and being secluded in his life. Terrance asks Brittany and Michael why they didn’t come forward earlier. Brittany says she wished she had said something earlier. Brittany blames them for being separated by a wall. Terrance says he would not have sent Joseph home had he known this. Taylor tells Kyle that she wants him evicted from the house. Kyle says he understands where his game is at and he knows he is going home. Again, he says sorry, and sorry Joseph was sent to the jury house.

Alyssa tells Kyle that she doesn’t think they should go to the end of the game in a relationship. At the end of the day, he would have picked himself before her and that is not someone that’s she wants to have babies with and imagine her life with, she deserves better than that. Kyle lied to her and manipulated her for his own game.

Kyle is broken, he can’t believe the way Monte and Terrance looked at him with pure disgust. He apologizes to Monte again and bot are crying.

It’s time for the live vote and eviction. Michael is up first and he votes to evict Kyle, Alyssa for Kyle, Terrance for Kyle, Brittany for Kyle, Monte for Kyle. With a vote of 5-0, Kyle is evicted from the Big Brother house.

Kyle is sitting with Julie, he says he was a very tough week but he is so grateful to have been in the house with the HGs.

Julie announces that next Thursday is a 2-hour double eviction.

Time for the HOH competition called Burning Bot, Zingbot’s festival. On Julie’s go, the HGs must transfer their puzzle pieces one at a time to the building platform. There, they must assemble their Zingbot puzzle. The first person to complete the task wins HOH.