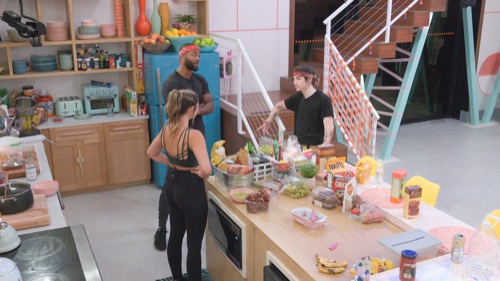 Tonight on CBS Big Brother airs with an all-new Wednesday, September 14, 2022, season 24 episode 30 and we have your Big Brother recap below! In tonight’s Big Brother season 24 episode 29 called, “PoV and Ceremony” as per the CBS synopsis, “Tonight on BB24 we have the completion, and the remaining five houseguests will be battling it out.  Once the competition is over we will find out if he/she will use the PoV.”

Tonight’s episode begins with the end of the Veto ceremony where Monte put up Brittany and Alyssa and he wants the nominations to stay the same because he thinks Taylor and Turner will take him to the final two. Alyssa thinks it sucks being on the block, Monte told her she is safe but she can’t help being nervous.

Taylor wants to take her shot and make a big move. She wants to convince Monte to put up Turner if Brittany can win the Veto and take Brittany off.

Brittany is worried that she is the target and she knows the only way she is safe is to win the Veto.

Monte tells Taylor that Brittany spoke to him and gave him a whole bunch of convoluted information. Taylor wants Turner out, at this point, Monte says she needs to win Veto for him to do it.

The houseguests all dream about winning the 750k and how it would change their lives.

The houseguests are woken up for the Veto competition, they have to get outside, Monte doesn’t make it on time, so he is disqualified because of his morning routine.

In this competition, each HG has a giant cuckoo clock that is missing its gears. Their job is to get the cuckoo clock working. They have to use 27 gears and organize them on the wall so they can wind the gears and the clock works.

Alyssa is completely lost, her gears don’t even touch. Brittany seems to be doing well, at least her gears are interconnecting. And, Brittany does it and shouts out “for you Michael.” Turner rolls his eyes and Monte looks like he is going to be sick.

Turner says it is not only annoying that Brittany won, but she needs to shout Michael’s name, too much for him. Taylor is happy for Brittany, but it puts her game in jeopardy. She hopes Monte makes a big move and puts up Turner.

Now that Brittany has the Veto Alyssa is so nervous. Turner is her best friend in the house and she doesn’t want to sit beside him.

Brittany is talking to Monte, she is so excited that she will be in the final four. She asks him where his head is at, and who is he planning to put up. She hopes she realizes if he doesn’t put up Turner, her target next week is Monte.

Monte goes to speak to Turner and tells him that 100% he is not going up. It doesn’t make sense his going into the week with the three women, he knows he will be the target.

Monte tells Taylor that Brittany threatened him that if doesn’t make a move, she will do something next week. Taylor does not want to be on the block, she plans on telling Monte anything she can to not be put on the block. Monte doesn’t want to destroy his relationship with Taylor, he feels like he is between a rock and a hard place with this decision.

Time for the Veto meeting, Brittany uses the Veto on herself. Monte has to name a replacement nominee, he names Taylor. Monte says he is making the decision based on his safety for next week.