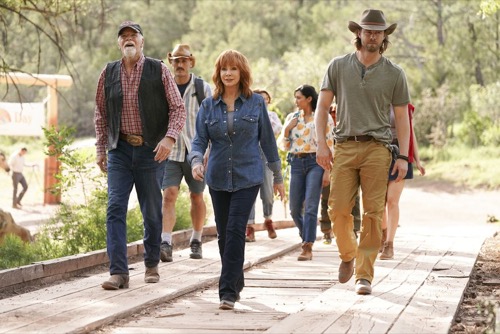 From the moment they arrive, things begin to go awry, with Cassie being called in to investigate a missing backpacker and the new sheriff in town, Beau, partnering up with Jenny to track down a murderer on the loose. A mountainous mystery begins to unravel for Cassie Dewell and Jenny Hoyt.”

In tonight’s Big Sky episode, a hiker heads to Deadman’s Drop. He hears music and finds a cassette tape player. He then turns to find a man. He’s creepy, talking about putting a deer out of his misery. He manages to get away but runs into the man again. He man startles him. Hee steps back off a ledge and falls to his death.

At the office, Jenny and Cassie talk about Beau while Denise toys to update them on a new case. A backpacker has gone missing. Just then, Beau comes in. He returns a dish to Denise who has been cooking for him. They all smile.

A glamping site owner named Sunny who runs Sunny Days, helps her husband straighten the sign at their newest site. She’s pushy and controlling and wants everything to be just right. Meanwhile, Jenny is giving Beau a ride. She sees a bench sign with Tonya’s face on it. He hate shows. Beau offers to help her stop hating. It will kill her. They come upon a man running in his underwear. They stop to see what is going on. Out of breath, the man tells them he was transporting a prisoner when she escaped.

Jenny and Beau take the man in. Hey admits he was seduced and thats how he was overpowered. Meanwhile, Cassie heads out to Sunny Days and talks to the owners about the missing backpacker.

Jenny and Beau arrive at a local mimi mart. A female prisoner robbed the place and then took off. Sunny welcomes a whole new group of campers. She charms them as they all find their tents.

Jenny and Beau learn the female prisoner has taken a hostage. Across town, Cassie visits Tanya. She wants to buy the ranch. Tanya is open to the idea but Cassie promisees to tell any seller about its murky murderous history.

Jenny and Beau work on securing background and details on their escaped convict and hostage.

Jenny and Beau talk on the road. Beau hopes it isn’t weird for Jenny that he and Cassie are friends and have movie night. He invites Jenny but she isn’t up for it. Just then, she hits a man who runs into thee road. They stop and realize its the hostage. It looks like the female prisoner pushed him from a building window and then they hit him. Jenny goes inside and finds an emote apartheid with some children’s belongings.

Sunny catches one of the female campers spying on a fighting couple in the woods. Meanwhile, Jenny and Beau learn their suspect has in fact taken a kid who she thinks is her daughter and taken off. They locate her at a salon trying to take the child at gunpoint. Jenny and Beau talk her into dropping the gun and take her in. Beau tells Jenny to give the mom a minute to say goodbye to her daughter.

Cassie signs the paperwork for the ranch after Tanya agrees to sell for her offering price. Sunny encourages the female camper fighting with her boyfriend to go and find him and make up. The female runs into the woods and find sheer boyfriend. While they sit and talk, blood drops down on her face. She screams. Sunny comes to see what is going on. It was nothing but a dead coyote. The girl wants to leave but her boyfriend thinks its cool.

Cassie and Beau welcome Jenny to their movie night. He texts his daughter, who is camping at Sunny Days. He finally tells Jenny and Cassie. They tell him Sunny is a good person and she is in good hands. Beau is upset his kid is having fun with her stepdad. They console him. Meanwhile, Sunny is burning the missing posters of the backpacker. She makes smores and brings it into the woods. She sings while calling to her son, the creepy man in the woods.