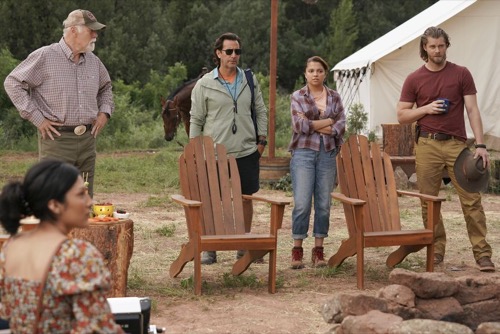 Tonight on ABC their new thriller by David E. Kelley, Big Sky: Deadly Trails airs with an all-new Wednesday, September 28, 2022 episode 2 and we have your Big Sky: Deadly Trails recap below. In tonight’s Big Sky: Deadly Trails season 3 episode 2 ‘The Woods Are Lovely, Dark and Deep,’ as per the ABC synopsis, “Helena is turning into a real family town. When disgruntled “reformed” realtor Tonya calls the police on a squatter living in one of her homes, Jenny arrives only to discover a shocking connection to her past tied to the case.

Across town, Cassie and Beau work to track the still-missing backpacker, and Sunny works to protect a secret of her own hidden in the woods. Meanwhile, Beau’s daughter Emily takes a campground investigation dangerously into her own hands, but has she stumbled upon a story far more nefarious than she could have imagined?”

In tonight’s Big Sky: Deadly Trails episode, Sunny speaks to her son Walt in the woods. She reminds him about their deal. H has something to show her. He brings her to the missing backpacker who is injured but alive, bleeding and gasping on the ground. She tells Walt she will deal with this. He leaves. Sunny sits beside the backpack and tells him she has to protect her own and he isn’t going to be alive much longer. He dies.

Cassie questions two women about the backpacker. They share that he went to knee Dead Man’s Trail. Meanwhile, Jenny finds Beau eating a sandwich from Tonya’s restaurant. She is angry and becomes more enraged when Tonya shows up looking for help. She has a squatter on her land.

Sunny’s husband asks her where she was the night before. She tells him she was stacking wood after he sees blood on her hand. Jenny and Beau head to Tonya’s property and talk to Jeff who says he lives on the property. He also has a utility bill in his name. Jenny searches his bag to find cash and a gun. He doesn’t answer honestly if it is registered.

Cassie hits the trail to find the backpacker. Beau is with her, out of breath and not aware they were headed on such a long hike. They find a water bottle, the backpackers. Meanwhile, Jenny brings Jeff in and books him. Donno is also booked.

Jenny hears screams and has to save Jeff and Donno from another jailer who pulls a needle out with a substance in it. Emily sees Beau at her campsite. He explains he came to talk to Sunny about the missing backpacker. Sunny played dumb about the matter.

Two of the campers who have been fighting at Sunny’s camp speak alone in the woods. He thinks she is flirting too much with McCormack, Sunny’s son. She reminds him they can’t leave just yet. When they can, and it’s safe, they can go get their money.

Jenny learns Jeff is a whistleblower who was to testify but ran. She thinks he is a coward. People will continue to get hurt. Beau arrives. Jenny updates him.

Sunny tells the other campers that two of them, the fighting couple, are missing but not to worry, they will find them.

Beau and Jenny tell the whistleblower, who wants to run, that the CEO of the company about to go down has been found dead. Meanwhile, the couple, Page and Luke, are lost in the woods as it gets dark. They fight and push one another. Page tells Luke if he touches her again she will kill him. She takes off.

Emily finds her dad in Page and Luke’s tent. He just found a journal and a gun in Page’s bag. When she comes in, he tells her she went into the wrong tent. A deputy picks up Jeff to take him to safety. They have one of their policemen, Pop, follow them to be careful.

Cassie discovers that the water bottle she found with Beau is the missing backpacker. Jenny and Beau realize the deputy has gone rogue or isn’t who she said she was as they get a call from Pop that she went off route with Jeff and not to the airport.

Sunny tries to find Walter in the woods. She runs into Cormack and tells him to listen to what she tells him to do. Meanwhile, Beau and Jenny find the deputy at a house with Jeff. They take her down and find another witness, who agrees to help Jeff take them all down.

Beau and Jenny arrive at Cassie’s new place with bread, salt, and tequila. They all share a drink. Emily decides to follow a trail alone. She sees blood on rocks.

Cassie tells Beau the water bottle belongs to the backpacker. Now he’s worried, Emily is up there. He tries to text her but it doesn’t go through. He doesn’t know it but she makes a run for it after finding Luke covered in blood. She gets pictures before he hears her.