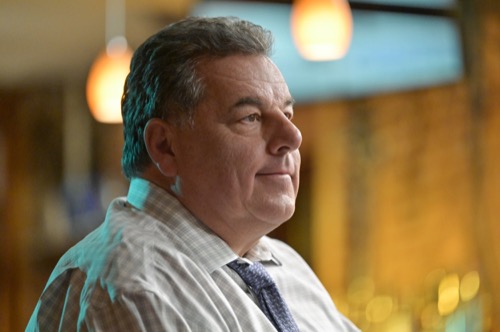 Tonight on CBS their hit drama starring Tom Selleck Blue Bloods airs an all-new Friday, December 2, 2022, episode and we have your Blue Bloods recap below. On tonight’s Blue Bloods Season 13 Episode 7 “Heroes”,” as per the CBS synopsis, “Erin and Anthony clash when Anthony’s daughter, Sophia (Isabel Harper Leight), is the sole eyewitness to a fatal shooting. Also, Frank wants to punish an off-duty copy for his inaction during an armed robbery.

Danny and Baez investigate a violent mugging with some unwanted help from Jamie; and Eddie and her partner, Badillo (Ian Quinlan), help an attack victim see the brighter side of New York City.”

Tonight’s episode begins in a diner, officer Hayes is inside having coffee when. A man comes in with a mask on his face and a gun, demanding the cashier for money. The waitress comes from the kitchen, sees the gunman, and drops all the plates in her hands, distracting him. Shots are fired and all the patrons start to hide. Hayes is off duty, he has his cell phone and calls 911.

Elsewhere, a woman is hit by a car, a witness says she was shoved into traffic. Another says a crazy guy just shoved her, ran away, and laughed the whole time. Maria and Danny are on a case, and Jamie is already there. The victims are Grace Mitchell and Adam Reynolds, boyfriend and girlfriend. She was robbed by two guys, he was assaulted.

Erin is on another case in a dance studio where a woman is on the floor in a pool of blood. There is one witness, a young girl, Sophia, who was getting a private lesson from her ballet teacher, Ms. Patty. Anthony is there and he won’t let Sophia talk, it’s his daughter and he just tells Erin she saw nothing and he is taking her home.

Frank calls Hayes in and asks him about the shooting in the diner. Frank says the report says he was armed and doesn’t know why he didn’t get involved. One person died and a 12-year-old boy is in the ICU. Hayes doesn’t want to talk, he says everything is in his report. Hayes leaves and Frank wants to take another hard look at the surveillance video, he thinks they have a problem. Frank thinks he should be fired for not getting involved.

Frank and Garrett have words, Frank thinks Hayes should be fired and Garret disagrees because he was off-duty.

Danny and Maria interviewed Grace and Adam, when she didn’t let go of her bag, one of the guys punched her in the face, and the other one kept kicking her.

Jamie tells Danny and Maria that one of Grace’s credit cards was used and they have the guy.

Anthony finds out that Sophia is seeing a therapist because of what she went through, Erin made the arrangements and he is furious. Anthony goes to speak to Erin, he tells her he is upset and that she had no right. She tells him they have a suspect, Patty’s ex-boyfriend and she needs Sophia to come in and ID him, she is the only witness to the murder. Anthony is further irritated.

Eddie has a match on facial recognition, for the guy who pushed the woman in front of the car, his name is Michael Harris, and he is a serial offender, she tells Luis.

Anthony goes back to see Erin, Sophia got a subpoena and is even angrier.

Danny and Maria interrogate the guy who used the credit card, he claims that Grace’s boyfriend, Adam paid him and his accomplice to attack her.

Sophia shows up at Erin’s office, Erin tells Anthony that he can’t stay, he is her dad, and she closes the door on him.

Adam is interviewed, and he denies it. He said he didn’t anything to hurt her, they weren’t supposed to attack. They were supposed to pretend, he was supposed to be the hero, and then she wouldn’t break up with him. One of her friends told him that she was getting bored, and he didn’t want to lose her.

Adam is arrested, but before he is taken away his girlfriend tells him off on how pathetic he is.

Erin finds Anthony in a bar, she sits down to speak to him, he tells him that Sophia gave great details on the murder and identified the ex-boyfriend who is being arrested as they speak. She tells him that she is disappointed that he didn’t think she had Sophia’s best interest at heart and it hurt.

Danny and Jamie are standing outside the house, Erin is there and they are talking. Danny says he couldn’t have closed his case without Jamie. Then Danny tells Jamie that he realized that he can be a pain in the ass sometimes.

Erin is walking Sophia out, she says it wasn’t as scary as she thought. Patty’s daughter is there and thanks Sophia as well. Anthony arrives to pick her up, and Sophia hugs Erin.

Garrett meets Frank for a drink and tells him that Hayes is filing a grievance with the union. Garrett says he understands that if he was the person in the diner, he would have reacted, but maybe his family would be at his funeral. Frank and Garrett are not going to agree on this. Garrett says Frank idealizes being a cop.

Anthony goes to see Erin and says he is sorry, he was just trying to protect Sophia. She says she forgives him, but he owes her dinner.