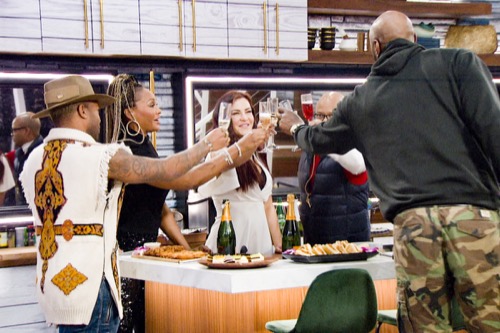 In tonight’s Celebrity Big Brother episode begins with the final five. Todd is happy that Carson is gone, one more step he says, so he can win Big Brother. Cynthia’s plan is to go against Todrick and Meisha. She needs to enlist Todd and Lamar to help her get Miesha out of the house. Todd tells Todrick that if he goes to the end with Miesha, he probably won’t get the votes to win the game.

Miesha tells Todd that she thinks people in the house are afraid of her. Meanwhile, Todrick doesn’t like that everyone is whispering, he says it is rude and he is so over it. Todd tells Cynthia that she has his vote, Lamar says yeah, if they aren’t teamed up with the strongest in the game, then they have to go against them.

Time to get ready for the HOH Competition, the BB art museum has just received a shipment of priceless artwork. But someone has mixed a few fakes. It is up to the houseguests to figure out the real artwork versus the fakes. Spread throughout the house are six pieces of original BB modern art.

Their job is to race through the house and compare the memory wall art to the originals in the house, they must figure out which piece of artwork is real and which is the forgery. Miesha wants to win the HOH so she can get rid of Todd. Cynthia knows that it is them against Todrick and Miesha, meanwhile, Todrick is worried that if he doesn’t win the jury will think that Miesha made all the big moves and he did nothing.

The houseguests are running around the house, they are trying to spot the differences, but it is not easy. Todrick cracks the code on one of them, he is the first to buzz in the first. Cynthia is doing well, neither is Lamar who is walking very slowly around the house. Cynthia is eliminated from the competition, it is all up to Lamar – they are in serious trouble. On the second round, Lamar is eliminated for being the last one to buzz in. It is now up to Miesha and Todrick.

Todrick really wants to win this, he doesn’t want to be seen as the sidekick. Both of them are having a hard time, Todrick is so lost that he runs around the house again. Todrick buzzes in first and he wins the HOH. He has been working his butt off behind the scenes and he couldn’t be happier that he gets to make the moves now. Todrick shows off his HOH room, he is so happy to receive a letter from his mother. It would mean the world to him for his mother to see him win Big Brother.

Todrick and Miesha talk game, he says he is putting up Todd and Lamar. If Todd removes himself from the block, he will put up Cynthia and send Lamar home first, but Todd is the target. Miesha says she felt that they really wanted to win the HOH and played hard. But she doesn’t understand why they didn’t play hard before now.

Time for the nomination ceremony. Todrick nominates Lamar because he says he is a trouble maker. And Todd, because they have reached their maximum “Tod” capacity. Everyone is laughing. Cynthia is not on the block, but she is not celebrating until after the Veto competition.