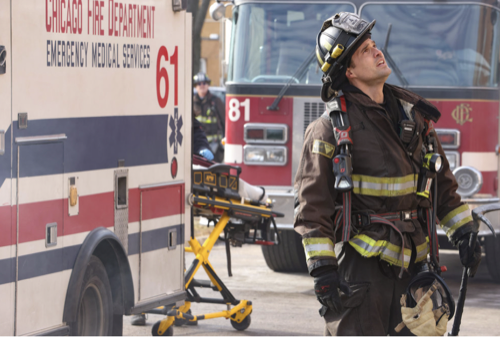 Tonight’s Chicago Fire season 10 episode 11 looks like it is going to be great and you won’t want to miss it.   While you’re waiting for our recap make sure to check out all our Chicago Fire recaps, news, spoilers & more, right here!

In tonight’s Chicago Fire episode, Stella Kidd is back. But she hasn’t given up on the “Girls On Fire” program. She still wants to maintain it even as she hopes to one day gain more duties and so the new lieutenant asked what will happen if she gets a call in the middle of a meeting.

She didn’t know what she would do. Severide then spoke up and he said he could take over the meeting. Kylie also spoke up to say they could handle it as well and so thankfully Stella isn’t short on backups if anything occurred during her shift. The firefighters were later called to the scene of an apartment fire. They went in because a young girl said her sister was still inside and it turns out the sister was never in there. And that Gallo went in there for nothing.

Gallo went into a burning building trying to save a life. He even called out to see if anyone was inside and he got deeper into the building than was safe because he was fooled by a smart speaker. He didn’t realize until it was almost too late. He had to throw himself out of a window to stay alive and Kidd saved his life by getting the ladder to him in time. Afterwards, Gallo had still be shaken up. Violet checked in on him and so Gallo mentioned she didn’t show when they were supposed to meet. He also tried to tell her that her and Dawkins is a bad idea and she told him to cut it with the jealous crap because he turned her down.

Gallo didn’t know if he had just kept silent on the matter that it would have fizzled out. Violet was already nervous as it about what people thought and Dawkins was doing everything to convince her to stay in the relationship. So, what Violet didn’t need was Gallo coming down on her or implying that everyone would think bad of her for staying in the relationship. She already had doubts and hearing that from Gallo would actually keep her in the relationship longer than necessary. It also was going to cost them their friendship because Violet didn’t want to be around him after that. And everyone later learned about what happened after the fire.

They learned that the sister that had desperately asked them for help was now being accused of starting the fire. Her name is Julia. She was fighting with her older sister Courtney that morning and the cops have been called over several incidents of domestic disturbance.

The cops actually arrested Julia once it became clear that fire was arson. Severide had seen Julia with her sister. He didn’t think she caused the fire because he saw how terrified she was at the idea of possibly losing her sister and so he went to Seger. He asked to be in on the arson investigation. She agreed to it because she does like working with him and the two make a great team.

Seger was of the opinion that Julia did this. Its why the cops later arrested her. It was Severide who felt for sure that Julia was innocent and he set about trying to prove it. It didn’t look good that the fire started after someone set fire to the older sister Courtney’s bed. It was also known that Julia was supposed to be home during the time of the fire. Things weren’t looking good for Julia. Julia and her sister haven’t gotten on since their mom died and Courtney started raising her. They fight all the time. Julia was also getting into trouble a lot. Courtney recently demanded that Julia get a job to help pay the bills.

Julia was eighteen now. She even tried to help around the house by looking for a job and that’s where she was when he fire started. Severide asked Courtney if she could check the recordings from that day. It showed that Julia was in fact looking for a job. It also showed that she never did turn off the smart speaker after she left. This coupled with the fact that the sheets had just been washed had told Severide how the fire was started. It was started by the bleach in the sheets and too much alcohol solution that Courtney put in her hair. A later field test proved this and so the ruling on the fire was that it was accidental.

Severide saved the day. He also saved Julia’s life. Julia wouldn’t have lasted in prison. She got knifed in lockup and had to be taken to the hospital and her time there only confirmed for everyone that she wasn’t a bad kid. She thankfully survived her knife wound, but if she had to go back to the holding cell, she would have gotten eaten alive.

Severide did a good thing and now he and Kidd can focus on their wedding. She showed her ring off to her friends. They told her they couldn’t wait for her to finally make plans and so that got Kidd excited as well. She couldn’t wait to get married. She also talked to Kylie who told her that she could take over Girls on Fire if or in this case when Kidd finally goes after the lieutenant job.