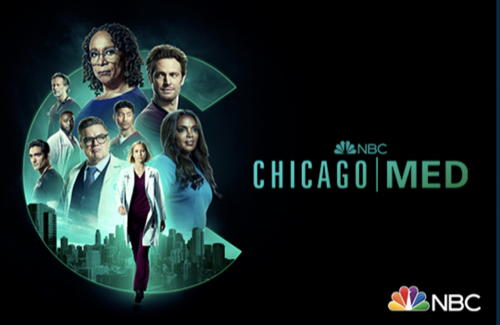 Tonight on NBC their medical drama Chicago Med airs with an all-new Wednesday, September 21, 2022, premiere episode, and we have your Chicago Med recap below. In tonight’s Chicago Med season 8 episode 1 called, “How Do You Begin To Count The Lossesd,” as per the NBC synopsis, “In the aftermath of Will’s apartment fire, Crockett, Ethan and Archer work together to try and save the survivors.

In tonight’s Chicago Med episode, Dr. Halstead bought a building. He purchased it thanks to the settlement he received from Vas-Com. Both he and Sharon Goodwin got rich. She donated all of her money. He donated half. He used some of the cash to get out of debt and he purchased an apartment building with the rest. It was supposed to be a great investment. He even had a renter. He was a landlord to Dr. Asher and he was letting Dr. Scott’s girlfriend Milena live there while she was in hiding. What he didn’t expect was that Milena would bring trouble to his front door. Milena was an undercover cop and a gang member she tried to take down had showed up with a gun.

He attacked Milena. She was fighting him off. Scott saw everything. He grabbed the gun and he accidentally shot them both. Milena got away in the aftermath. Only Someone sent the building on fire and both Scott and Halstead stayed behind to treat the wounded gangbanger. It turns out the Hippocratic oath was no joke. They were willing to die in that fire as long as they kept that man alive. Thankfully, they didn’t die. They were instead saved by the Chicago Fire Department. The firefighters got them out of the building and they treated them for smoke inhalation. Asher had needed treatment as well. She had been with Halstead when the first started, but she went back into the building to find him when he didn’t come out right after her and she almost died as well.

It was a miracle no one was injured in the fire. They were all saved by the firefighters. Milena tried going back on the run except her gunshot wound was serious and so Scott found her dying in the neighborhood. He called for an ambulance. She was rushed to the hospital and she later died from her wounds. Scott had been with her till the end. He tried to talk the doctors to keeping working on her. There was just no point for them do so. She was already gone by time she arrived at the hospital. Scott blamed himself for her death. He felt if he had never picked up that gun that Milena would have survived.

Elsewhere in the hospital, Dr. Marcel was feeling guilty. Not only was he the doctor working on Milena but her death was just one more thing he couldn’t get right that day. Marcel had been dating Dr. Blake. Blake put him in charge of her medical decisions while she had surgery. Marcel decided to play it safe rather than fix a problem and now everyone is angry with him. Blake, her daughter, even her surgeon was angry with him. The surgeon also pointed out that he took down a top notch organ surgeon while Marcel himself was a rising star in that field. Marcel realized how it looked. He tried to get himself removed from organ donation surgeries. And Goodwin turned him down.

Goodwin reminded him that a lot of money went into preparing for that field. The hospital just lost the chief surgeon for that job and they couldn’t afford to recruit another top notch surgeon. Goodwin refused to accept his resignation. She told him he was staying in the field. She also told him that while he may feel the need to punish himself in the coming days – he couldn’t let that intervene with his job. Marcel had to stay on in organ donation. He didn’t like it. He couldn’t change it and so it was just something he had to live with. And the only thing he could fix was the problem with his patients.

Dr. Marcel was also on the gangbanger’s case. The guy needed a new liver or half of a living tissue. Scott offered to donate. He wasn’t the right blood type and so Scott went looking for someone to donate. Scott wanted to keep the gangbanger alive as long as possible. He managed to find the guy’s brother. The brother was pretty decent human being. He had an actual job. He wasn’t involved with the gangs and so he was the perfect person to donate half of his liver. Marcel could go ahead with the surgery. He just had to do it with less blood than he normally does. This particular surgery requires twenty units of blood. The hospital could only give him seven units.

The hospital was experiencing a blood shortages. Hospitals all over America were experiencing a blood shortage after covid and it was right up there with the physician shortage as well. Only Chicago Med was doing its best. Marcel was also doing his best. He went into surgery with his patient and his patient was just losing too much blood. Marcel had to pack him. It would give the gangbanger enough time for his own body to replenish the blood. Marcel had to postpone the surgery. It upset Scott. He wanted the surgery to go ahead. It wanted to be a success and he wanted the gangbanger to be arrested for Milena’s death.

Halstead wanted the gangbanger to be arrested for the fire. His friend and former girlfriend had taken a turn for the worst. Asher was the fine at first. She only began experiencing breathing problems hours later and it got so bad that she had to be intubated. It turns out Asher’s drug addiction had wrecked havoc to her body thanks to her drug of choice. The same body that had just been through a trauma when she got caught up in that fire. Asher went from walking and talking to suddenly being in critical condition. It was a lot for Halstead to take. He was worried. He needed someone to support him in that moment and thankfully he was surrounded by friends.

Marcel later started the surgery again. His plan worked and there was no more bleeding. Scott stayed long enough to watch some of it, but he ultimately made a decision even before the surgery was over. Scott was going to leave Chicago Med. He in fact wanted to leave Chicago entirely. He wanted to get away from his memories of Milena.

Asher’s condition improved and her almost dying was now a new charge against Jessa Rinaldi. It was Jessa who started the fire. She bought the accelerant with her credit card. She was also seen on surveillance cameras entering and exiting the building. She had no reason to be there as so now she might be facing life for attempted murder. Which didn’t make Vas-Com case look any good. Halstead and Goodwin still went to court. They testified in that Vas-Com case. And hopefully things will resolve themselves soon.

Maggie on the other hand wants nothing to do with Vanessa’s father because she was afraid she might still have feelings for her old boyfriend.

Marcel meanwhile tried to talk to Blake and she still didn’t want anything do with him.

But Dr. Charles had a tough day at work when a patient’s parents refused to believe their son was mentally ill and took him out of care. Charles tried seeing a new psychiatrist to talk about it. He didn’t get very far because the guy was unprofessional and so Charles never got help for himself.

April came back. She finished her program and has returned to Chicago where she promptly ran into Dr. Choi.

And Halstead said goodbye to Scott after he told him it was Jessa who started the fire.