Chicago Med Recap 09/28/22: Season 8 Episode 2 “(Caught Between) The Wrecking Ball And The Butterfly” 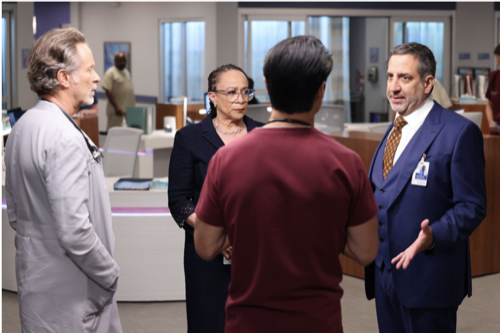 Tonight on NBC their medical drama Chicago Med airs with an all-new Wednesday, September 28, 2022, premiere episode, and we have your Chicago Med recap below. In tonight’s Chicago Med season 8 episode 2 called, “(Caught Between) The Wrecking Ball And The Butterfly,” as per the NBC synopsis, “Supply chain disruptions dramatically impact Med causing Crockett and Kai, a new surgical resident, to clash with other doctors. Maggie reveals something to Ben. Ethan and Archer help a patient with ALS.”

In tonight’s Chicago Med episode, Dr. Archer admitted that he has a son. He admitted that to Dr. Charles. He also admitted he hadn’t seen his son in years. He was forced to cut him off because his son Sean is a drug addict and Archer didn’t want to stick around to watch his own son die. But then he saw something at work that reminded him of his son. He then reached out to Sean in spite of all those years. He didn’t get him on his cell phone. His son had to be reached through the prison service because that’s where he was now. He was in prison. Again, a lot of years went back before Archer suddenly decided to reach out. Sean could have been angry with him. He chose not to be. He’s also finally taking responsibility now.

Sean wanted to make a plea deal that would see him stay in prison a little longer. His father didn’t agree with that decision. He said that Sean was choosing to quit. He also implied Sean’s been like that ever since he was a kid and he wanted to hire his son a new lawyer. Sean currently has a public defender. But that wasn’t good enough for Archer. He wanted to afford the best attorney that money could buy. He wanted his son to get out of prison now and not later. Archer was still thinking about what he wanted instead of what his son wanted. And so Sean eventually had enough of the lecture.

Sean refused to see Archer. He told him to call him in another fifteen years. Maybe then he’ll change. Archer became very upset by that comment and he went to work angry. Archer later ran into a familiar face at the hospital. A man he diagnosed with ALS was back. The poor guy was having problems breathing. He needed a laptop to communicate because he could no longer talk and he thought his breathing problems might be the end. Al didn’t want to keep living like he was. He was ready to die. It was Archer who wasn’t ready to let him go. Archer told Dr. Choi that he wasn’t losing this one. He couldn’t, not after what happened with Sean.

Archer needed to talk to someone about his son. Otherwise, it was going to affect work. Only Dr. Charles was busy. He was called in for a psych evaluation because a mother came in with signs of paranoia and delusions. She thought there was a collective that wanted to take her son away from her. She couldn’t remember how she got to the hospital. She completely forgot that she almost crashed the car with her son inside because she went through one of her episodes. Charles spoke to the son. Henry admitted that his mother has been acting off for the past year. He also tried to assure Charles that his mother was going to get better, but Charles believed that was merely wishful thinking.

Charles wanted to evaluate the mother on her own. Jenny and her son have been living out of their car. She’s no longer employed. She gets confused all the time. Charles was actually talking to her when she forgot who he was in the middle of the conversation and so Charles sent her for a CT. Jenny was about to be given a special dye that would help the doctors locate any problems within her brain when Marcel came rushing in. Marcel needed the last of the dye. He had someone prepped for surgery and he needed the dye to complete it. Unfortunately, the hospital has been short-staffed as well as short on supplies.

Blame, the pandemic. Or the war in Ukraine. It still meant it was hard to fully supply a hospital and just that morning Sharon was telling her doctors that they might have to go without. She never expected to be given a dilemma so soon. The doctors from both sides made their case. Sharon chose to go ahead with the CT because a head wound was a bigger issue than a bullet removal. Which would have been fine if Marcel’s surgical intern didn’t decide to get cocky. Student Dr. Kai Tannaka-Reid was so arrogant that he thought he knew better than Marcel. His arrogance was so huge that he almost killed his patient. And Marcel had to step in to save the day.

Marcel saved his patient’s life. Kai realized he wasn’t god’s gift to surgery and he finally began learning something. It turns out some of the med schools had suspended physical learning because of the pandemic and so Kai wasn’t the only one making mistakes. Archer was dealing with his own intern. It was like interns gone crazy. They were making mistakes all over the place. Not the doctors themselves were much better. Archer had made a promise to his patient that he wouldn’t have to live his life on a tube and he lied. It was looking more and more like Al has to stay on the tube. Something he didn’t want.

He explicitly asked not to live on a tube. He was even willing to die as long as he didn’t have to live on a tube and Archer had promised him that he wouldn’t end like that. But Archer was wrong. He made promises he couldn’t keep. And now Al was living his worst fear.

As for Charles, he eventually did find out what was wrong with Jenny. She wasn’t crazy. She had a small tumor in her chest and that’s what was causing the psychosis. And once the tumor was removed, she was back to her old self. Meaning Henry had been right about her getting better.

Marcel also had to deal with Kai filing a complaint about him. He claimed Marcel was rude and condescending and Marcel could have filed a counter-complaint but he chose not because he wanted Kai to stay on his team. He was going to have to torture him.

Maggie finally told her husband that Vanessa’s father was back in the picture and he was upset as well jealous.