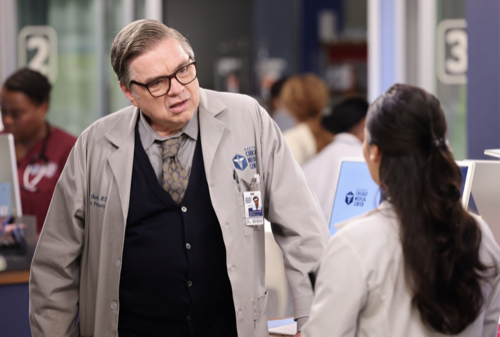 Tonight on NBC their medical drama Chicago Med airs with an all-new Wednesday, October 19, 2022, episode, and we have your Chicago Med recap below. In tonight’s Chicago Med season 8 episode 5 called, “The effects of the supply chain shortages continue to impact the E.D. when Vanessa’s drug dealer reappears.

One of the victims of the recent train crash needs a transplant, forcing Crockett to improvise. Charles and Nellie help a patient with amnesia.”

In tonight’s Chicago Med episode, the psych ward was full. The ED was full of psych patients that needed beds and the ward just didn’t have it all. The other hospital also didn’t have it. Everyone was full. The pandemic has left behind a legacy of a mental health crisis and no authority was willing to deal with it. After Dr. Nellie Cuevas couldn’t find beds for their patients, Dr. Charles told her to check with clinics. They couldn’t treat everyone and yet everyone deserved treatment. It was tough. Even Dr. Choi felt the pinch. Choi came in to work like it was any other day and he noticed that Maggie was trying to keep from handing over a patient’s file. He soon managed to sneak it away from her. And that’s when he noticed who the new patient came in with.

The patient came with April. April was at the hospital. She escorted her patient there because Brock’s condition was serious and contradictory. He presented with symptoms of gastritis. Only he wasn’t vomiting. He would have been sick if he actual had the condition and so something else was wrong with him. His physicians just didn’t know what that could be and that’s why they took him to the hospital. April could have taken him to another hospital, but she trusts Chicago Med. She told Maggie that she didn’t want to run into Choi. That’s why Maggie was trying to keep him away from Brock’s patient file, but Choi saw April and there was no way he was walking away from this one.

Choi tested Brock. He couldn’t find anything that stood out and so he ordered a couple of tests. He was waiting on the results, April was with her patient, and that’s when they both heard the commotion. Someone began attacking the doctors. He was a new patient. He showed signs of being confused before he became violent. He began pushing people before escalating into flat-out assault. He beat up Dr. Archer really badly. He punched him several times. He also hit with him with an oxygen tank and several of those blows was to the head. Choi stepped in to keep the guy from killing his friend. They tussled for a bit until security finally showed.

The security team wanted to go straight for the tasers. It was April who stopped them because she reminded them that they could have hit Choi and that’s when the intern stepped in. Dr. Zach Hudgins saved the day. He gave the patient an injection that quickly sedated him. With the guy finally down, the doctors were able to treat him. The patient’s name is Devon. He was high on cocaine laced with PCP. He probably didn’t even know about the PCP. He simply took the cocaine and he didn’t know about the rest until he began having side-effects. And Devon was known to Dr. Taylor because they both went to medical school together.

Devon was also a drug dealer now. He was the one that got Taylor the medication she needed to give to her patients. But now she was worried. Taylor had to call the cops because Devon was on dangerous drugs and so her worry was more about a possible retaliation. She didn’t want Devon to rat her out. If he told anyone that he gave her illegal prescription drugs, she might get into legal trouble. Taylor was worried if she told the cops about Devon’s drugs that he would try to tell on her to get out of trouble himself only Dr. Halstead thought that was a risk worth taking. He reminded her that the dealer that sold Devon the cocaine could potentially kill someone with a bad batch. They had to consider the safety of the public.

Halstead was in just as much trouble as Taylor. He was in on the decision to give the patient illegal drugs. He didn’t administer the drugs. He simply left out so that the patient’s husband could give it to her. But Halstead and Taylor chose to play it safe. They alerted the detectives and they also mentioned what they did. They were in trouble with the cops as well as with Sharon Goodwin. She hated that they went rouge. She told them that they put the hospital at risk. She had thought that Halstead was over such risky behavior and yet here he was doing it all over again. It’s like he never learned from his mistakes.

Speaking of mistakes, Dr. Archer had Dr. Asher treat him. The ED was full. He didn’t want the intern doctor treating him and so he demanded that Asher treat him and that was a mistake. She was brusque with him. She also undermedicated him. He had to get snappy with her and demand medications. Archer had to be his own advocate. He wasn’t the only one. There was a nice elderly woman who has been waiting for medical transport since the night before. No one showed to pick her up. She had to stay on top of the doctors and nurses to make sure that she got a ride. But the ride came too late. Eleanor was too sick to take the ride when it came.

Eleanor missed most of her daily medications. She also hadn’t had anything to eat or drink in hours. She was dehydrated and in pain because her arthritis was acting up. When medical transport arrived, Eleanor said she just wanted it all to be over. Cuevas had to ask Charles if she was simply venting or did she just confess to wanting to self-harm. Either way, they still admitted her. They even had a fresh bed in the psych department because Charles tried to get treatment for someone struggling with the depression and that guy left before he could be treated. And Cuevas thought it was irony that Eleanor came because she fell and couldn’t get up and ended up staying because she got sick at the hospital.

Choi meanwhile figured out what was wrong with Brock. Brock was struggling with a disease called MIS and it was a something he got after he had covid. But Choi also figured out that Brock was AWOL. He also chose not to call the MPs about it. He showed April that he changed and that was enough to reignite a spark. They went dancing out to a club afterwards. And they really reconnected.

As for two troublemakers, Halstead and Taylor aren’t getting in trouble over what they did. The board decided to let it slide. Sharon warned him not to do it again. And Maggie told Halstead not to drag her daughter into his mess.

Dr. Marcel also pulled off a miracle rescue and he was able to salvage a pair of lugs for a patient of his and so he made history.

And Charles’s patient did come back and now they were out of beds again.